Jake Okechukwu Effoduh Represented Nigeria at the World Economic Forum Meeting at the Vatican. He shares his experience from his meeting with the Pope.

Insight from the World Economic Forum meeting at the Vatican

There is a common Igbo[1] proverb that says, ‘A man who does not leave his hut will bring nothing in.’[2] This saying describes a person with self-interest who is only concerned about the business in his hut and does not see the need to go or look outside. The hut represents a mindset. It is a way of thinking, that restricts not only the individual, but also their family and community at large.

Reflecting on this proverb reveals the potential of an increasing value to an individual and the community at large when a person is willing to go outside and bring more people in. The notion of: ‘with more people in the hut, the food gets smaller for everyone’ is a deceitful concept because with more people let inside, there will be more food. There are more resources outside therefore, more people coming in, means more resources and capacities.

“Whoever looks into a mirror in order to improve himself hasn’t really changed”. The capitalist world has looked at businesses in the same mirror for many years and the image it creates is a widening gap between the rich and the poor. Perhaps it is time to look, maybe not at the mirror anymore, but the window – to see who is outside the hut and if possible open the doors to let them in.

This reason why the World Economic Forum called together 80 leaders from around the world was to explore ways of overcoming social and economic exclusion. The event was a result of the collaboration between the Holy See (Pontifical Council for the Laity) and the Pontifical University of the Holy Cross, and it took place on the 18th and 19th of November 2014 in Rome, Italy. The meeting was inspired by the teachings of Pope Francis contained in the book, Evangelii Gaudium[3] and his message to participants at the Annual Meeting 2014 in Davos-Klostiers[4]. His Holiness states that, ‘Business is – in fact – a vocation, and a noble vocation, provided that those engaged in it see themselves challenged by a greater meaning in life’[5]. 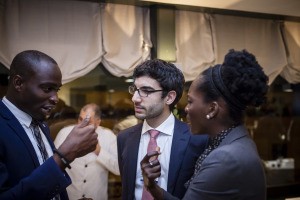 Jake Effoduh Speaking With Chidiogo Akunyili, The Senior Manager Africa Of The Global Shapers Community As Well As, Mauro Ometto, A Global Shaper Of The Rome Hub.

Today, half of the largest 100 economies are companies[6]. The governments who are meant to be custodians of the ‘greater meaning’ are now losing economic power to the Fortune 500s. Businesses are more interested in profits than the ‘greater meaning in life’ and this has dragged the world to an extreme poverty trap. With a billion and a half of the world’s population living in slums, the current social inequality has resulted into a global economic dysfunction. Economic and social inequalities are the root causes of social evil. This is evidenced by Oxfam’s statistics revealing that more than half of the world’s population owns the same wealth as the richest 85 persons[7]. In other words, 85 individuals in a world of 7 billion are living in huts that can accommodate half of the world.

Participants at the Vatican meeting comprised of World Economic Forum’s Global Shapers, Young Global Leaders and Social Entrepreneurs communities. Also present were representatives from the Holy See, senior business leaders and global experts on inequality and social inclusion. We examined the drivers of inequality and explored novelties from the private and public sectors, and civil society that can help build more inclusive, entrepreneurial economies that are based on the principles of love and respect for all.

The outcome of the meeting was the creation of a new social contract for all human progress, which will provide essential resources for economic engagement, ensure well-functioning institutions, rights and responsibilities, and enable all global citizens to lead purposeful lives. The three areas to enable the realization of a new global mindset are: personal transformation, organizational transformation and cultural transformation. 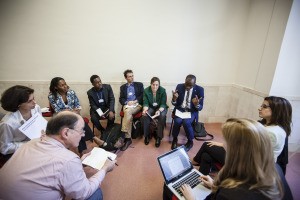 On personal transformation: The Pope made it clear that people can make relevant contribution by placing their expertise at the service of those who are still in poverty; “The vocation of an entrepreneur is a noble work when it is led by a quest towards the broader meaning of life[8].” One hut can change the mindset of an entire community. One person can make the difference. Professor Klaus Schwab is one person. He founded the World Economic Forum in 1971[9] through inspiration from his own book, Moderne Unternehmensführung im Maschinenbau[10] – in which the stakeholder principle was first ever defined[11]. He is the same person who created the Schwab Foundation for Social Entrepreneurship[12] in 1998, at a time when nobody knew what social entrepreneurship was! Two heads may be better than one, but one head is enough to inspire and commit others to improving the state of the world. Schwab’s ideology is that even if one hut (or stakeholder) may be too small, one must realize that there are those who do not have huts – and they constitute one and a half billion people.

The purport of organizational transformation is to create a new language in organizations. The language of using long term dynamism to meet short term goals; the language of leadership not rulership; the language of owning the responsibility for social transformation and human development. We have to evacuate ourselves from the circular economy of “take-make-waste” to “take-make-retake-remake-retake-remake.” Capitalism in its current model is unequivocally broken and it is going to get worse if we don’t incorporate ecological boundaries as well as the need to embrace equality in humanity. We need a world of plenty and not plenty for a few. Therefore there is need for organizations to transform their mindsets. It’s not about making profits but about making people.

Cultural transformations will only fruition with acceptance. We must work towards a system that embraces all people from all backgrounds, ensuring that each individual and group has the ability to contribute to a prosperous, purpose-driven world to their highest potential. They say what a man can do; a woman can do better. But why do women constitute 70% of the world’s poorest?[13] Anti-discrimination laws covering sexual orientation have an especially strong correlation with GDP per capita[14]. But do we need a business case before we advance equality? Living by the culture of your hut is like looking into the mirror to improve yourself. Stepping outside your hut will give you an opportunity to have a better perspective. Stereotypes must be unlearned. 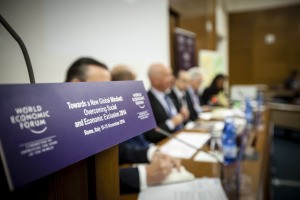 The new mindset is about recognizing the human dignity. It is about selflessness and sacrifice. It is ensuring that institutions exist for common good and stewardship. Businesses must be capable of feeling emotion, compassion and humanity. ‘How can it be that it is not a news item when an elderly homeless person dies of exposure, but it is news when the stock market loses two points?’[15]

The Qur’an instructs us to ‘give them [the poor] of the wealth of God, which He has given you’.[16] The bible says ‘whoever is generous to the poor lends to the Lord, and he will repay him for his deed’[17]. Charity is a necessity in life because some of us are tested by being rich and some of us are tested by being poor, but charity is not enough. The new mindset goes beyond the thinking that the poor cannot help themselves, or that they have no capacity. Our role in helping the poor is not likened to filling up empty vessels but to ensure that the vessels are uncovered to all their potentials. There is no dignity in giving another man bread, if you are capable of teaching him how to make bread.

Social and economic exclusion is not our inescapable destiny. We can make what seems inevitable, intolerable. We need to change the mentality of “we can’t fix this world” to “we can’t have this world like this” Hence the reason why the pope calls us to action, with a sense of urgency: ‘to ensure that humanity is served by wealth and not ruled by it’[18]. 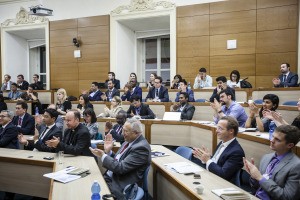 At The Plenary With Participants 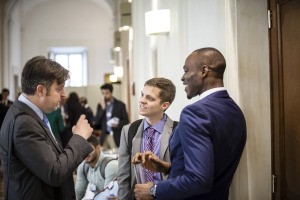 Speaking With Experts On Inclusion

Jake Okechukwu Effoduh is one of the 4,401 Global Shapers: A Community of exceptional young individuals under the age of 30, initiated by the World Economic Forum with currently 359 independent hubs worldwide. Jake Okechukwu is the Deputy Curator of the Abuja Global Shapers Hub, one of the 5 existing hubs in Nigeria. He was invited to The Forum’s meeting at the Vatican where he worked with a selected caucus to draft the new social contract; a framework for meeting the challenge to overcoming social and economic exclusion in the world. It was submitted to, and accepted by His Holiness Pope Francis I. Email: effoduh@gmail.com