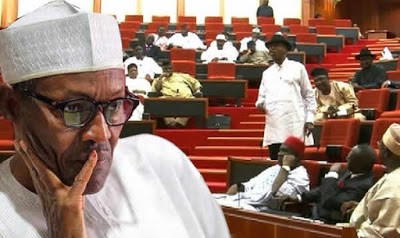 There is no need to recall senators for plenary to debate President Muhammadu Buhari’s medical vacation extension letter, the Senate said yesterday.

The upper chamber, which confirmed receipt of the letter, said the president had complied with the constitution’s requirement to that the Senate must be informed about his vacation.

He said: “There is no emergency for us to say we are suspending or recalling what back. When we resume, all communications that come in will be taken. There’s no emergency here because he has done what he is constitutionally mandated to transmit a letter to us and he has done that.”

Abdullahi added: “As you are aware, the Senate suspended plenary to carry out one of the most important duties, which is the interaction with the MDAs on the 2017 budget, and you will recall that we received before we suspended plenary, a letter from Mr. President which was dated 18th, January 2017 where he informed the distinguished senators that he was proceeding on his vacation for 10 days and this is to meet the constitutional provisions.

“In the letter, he stated very clearly that the vice president would take charge of the running of the country. This is a normal thing and, of course, based on that timing, Nigerians were expecting the return of Mr. President.

“Now, we are in receipt of the second letter from Mr. President where he is informing the Senate that he is extending his vacation and this arose because in the first letter he did inform us that he will use that to see his doctors.

“This is a constitutional provision and let me say it is within his prerogative to do so and we are in receipt of that letter accordingly.
“This is why we had to brief you so that we are now confirming that ‘yes we are in receipt of that letter formally’ and we know that many things have been going on but this is our formal and official pronouncement to Nigerians on this particular subject matter.”

Asked whether the letter was indefinite on the President’s return, Abdullahi said: “It didn’t say indefinite because indefinite is taking the matter out of context but then he said he is extending that beyond the 10 days he has asked for and because the tests that are going to be run are not in his hand; it is in the hands of the doctors, he is not giving us a date. But definitely he is extending and I think that is what is important.

”As it is, you said according to the constitution. I’m not sure if there’s any provision giving specified date for the leave of Mr. President not to my knowledge. And if you say by our rule, Mr. President does not work by our rule; we work by our rule but the constitution guides us all.”
”As it is we have suspended plenary to allow the various committees attend to the national budget which is a very important document that Nigerians are waiting for.

Also yesterday, Senator Abu Ibrahim (Katsina South) said contrary to insinuations about the President’s health, Buhari is merely exhausted.
Ibrahim, who is believed to be one of the senators close to President Buhari said the weight of the country’s mounting problems might have affected him.

The senator said that he was in touch with Buhari and was actually with him the day he left the country.

The Katsina South lawmaker reeled out issues that might have taken a toll on the President, including destruction of oil pipelines that reduced production to almost half, fall in oil prices that affected the economy and led to recession, and the falling exchange rate that has affected the purchasing power of most Nigerians.

He said that some of those talking about the falling exchange rate failed to also talk about what led to the weak naira against the dollar.
Ibrahim, who stressed that “President Buhari will soon come back”, noted that there was no need for Nigerians to be unduly apprehensive “because Mr. President is not sick but exhausted by the weight of the problems the country is going through”.

Nigerians, he added, should rather pray for the President to return and continue his work to make the country better.

No need for emergency sitting over Buhari’s letter, says Senate