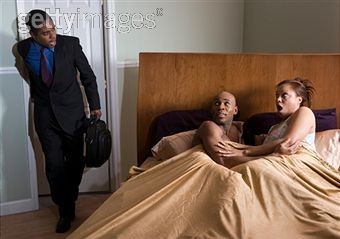 Ever wonder if your significant other isn’t being entirely truthful? Unfortunately, there’s a good chance you’re right. It’s perfectly normal to lie.

In a study of undergrads, 60% of participants lied at least once during a 10-minute casual conversation with a stranger. But suppose that fibbing extended to important matters, like fidelity, and important people — like a significant other.

Science can’t tell you if your partner is sleeping around, but recent research has shown we can often detect when someone is hiding something.

Here are five ways to tell if your partner may be keeping something important from you.

Other people — strangers, even — have an uncanny ability to detect when something’s just not right in someone else’s relationship.

Brigham Young University psychologists tested out this idea in a lab. They had couples partake in a collaborative activity in which they were supposed to draw an object. Before the activity, the scientists had the couples answer questions privately about the relationship, including whether or not they had cheated. Then, they blindfolded one participant — the designated artist — and had the other partner gave him or her directions on what to draw. The researchers videotaped the activity and later showed the footage to another group of volunteers who didn’t know the couples.

The volunteers were frequently able to tell which of the couples included a partner who had cheated. (Their guesses were not right all the time, but more often than chance.)

While additional research is needed to corroborate this preliminary result, the work suggests that an outsider who observes a couple doing something that requires working together, like cooking or planning an event, may be able to detect infidelity or unhappiness.

“People make remarkably accurate judgments about others in a variety of situations after just a brief exposure to their behavior,” wrote the researchers in the study.

2. Mull it over while doing something else.

People are generally bad judges of character — consciously, at least. When we are given time to process another person’s actions subconsciously, however, we are far better at telling truth from deceit.

In 2013, a team of psychologists had a panel of student judges watch people give testimony and decide if they had been lying. The students who were given time to think before they made a decision — so long as they were made to think about something other than the case they were assessing — were better at figuring out whether the person they were judging had been lying.

“These findings suggest that the human mind is not unfit to distinguish between truth and deception,” write the researchers in the study, “but that this ability resides in previously overlooked processes.”

3. Listen to their voice.

Canadian researchers recently had a group of volunteers listen to a pair of voices and rate how attractive each speaker sounded. Then, the researchers asked them to judge how likely each person would be to cheat in a romantic relationship. While the female volunteers were most likely to say the men with lower-pitched voices would cheat, the men typically guessed that the women with higher-pitched voices would cheat.

Men with more testosterone tend to have deeper voices, and women with more estrogen tend to have higher-pitched speech. And as it turns out, higher levels of testosterone in men have been linked with higher rates of cheating — though the jury is still out on whether there is any such association in women.

The researchers have yet to link their findings with actual observed behavior, but they say the study’s results make evolutionary sense. Hypothetically speaking, a preference for higher voices in women and lower voices in men might “allow us to choose a mate that is likely to stick around and have children, and not do so with other people,” McMaster University psychologist Jillian O’Connor told LiveScience.

4. Pay attention to social media use.

Does your partner spend more time tweeting than talking to you? Recent research suggests that people who are highly active on Facebook and Twitter are more likely to have social-media-related conflict, and subsequently more likely to experience “infidelity, breakup, and divorce.”

In his study, University of Missouri researcher Russell Clayton looked the social media habits of close to 600 Twitter users. The average person used Twitter close to an hour a day, five days a week. Those who tweeted, responded to tweets, or scanned their Twitter feed more often than that were more likely to get in arguments with their partners, and also more likely to divorce or cheat. The more time they spent on Twitter, the worse relationship outcomes Clayton observed.

It’s unlikely that too much tweeting, posting and liking caused other people to cheat, but there is certainly a connection between the two behaviors.

5. Watch for sudden changes in behavior.

If you’ve been with your significant other for a while, chances are you know how they normally act — what type of foods they eat, how they react to challenges or surprises, how well they listen, etc.

Sudden changes in body language, from facial expressions to patterns of speech, can be red flags for duplicitous behavior, according to research from Lillian Glass, a behavioral analyst who once worked with the Federal Bureau of Investigation to study how to spot signs of deceit.

“Your body experiences these types of changes when you’re nervous and feeling tense — when you lie,” she writes in her book, “The Body Language of Liars .”

One telltale sign of lying, she says, is a sudden inability to speak. This happens because our automatic nervous system often responds to stress by starving the mouth of saliva. Another is a change in breathing. This reflexive action can occur as a result of quick changes in heart rate and blood flow which make us feel out of breath.

Other research backs up Glass’ findings — psychologists suggest looking out for when someone repeats a question after it’s asked or veers into personal attacks rather than answering.