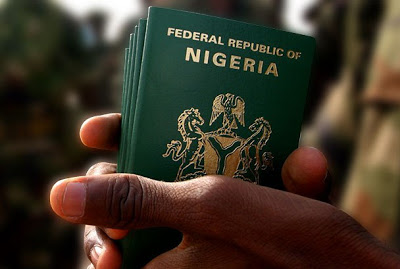 I must confess choosing to write a topic like this, is one of the greatest challenge I have ever encountered in the whole of my existence. I had sleepless nights thinking about the title to use for this work.

I am well abreast of the fact that choosing a topic like this will generate a lot of questions and controversies in the minds of my readers but I thought it would be wise of me to shed some light on the issue of my origin and nationality, I wrote this piece not only because its a part of the compilation of my ghetto script but to also huff-puff my mind and correct some misconceptions of people regarding their perception of me.

It is with deep sense of utmost necessity that. I’m writing to let people (those whom I have met and those whom I’m yet to meet) know that I AM NOT A NIGERIAN, even though some irreversible circumstances make people identify me as a NIGERIAN which I will discuss in the preceding paragraphs but before I explain the irreversible circumstances, I will like to talk about the two types of slaves that I know.

Let us go down memory lane here, before the Europeans first came in contact with Africans in the 15th century and for much of the 18th and 19th century, there was nothing like a place called Nigeria, Togo, Cameroon, Republic of Benin, Ghana and what have you.

All we had then in the African traditional society where so much emphasis was placed on respect for elders and culture and where Africans had been developing quantitatively and qualitatively was a kingdom or an empire like the OYO empire, ASHANTI kingdom, KANURI kingdom, DAHOMEY kingdom and many more. But when the European great powers came to Africa through exploration and trade, they abolished most of the African system and way of life in other to advance their Agenda to improve their society at the expense of Africans.

The idea of colonialism was to explore all around the world and gain access to territories where there was little or no military power in other to exploit their resources, enslaved their people and compel them with force to be subjected to the way of life of their colonial masters.

To forestall this, several congresses were held and treatises were signed among the European great powers. After all said and done, the great powers came into Africa with their heavy military resources and as such used their military power to force, enslaved and colonised Africans.

It was after this that many African states were shared among the European great powers like the Britain, France, Portugal and spain. During this time, some part of west Africa were shared among the French and British government. Nigeria in particular, was granted to the British government which colonised, enslaved and exploit their (African) resources at the expense of the people. While Togo, Mali, Republic of Benin and the likes were granted to the French government.

The Name Nigeria was coined from River Niger flowing through her territory. A name given by flora shaw in 1898, a wife of the British Administrator in the region as at that time. A colonial name or more or less like a slave name given to all the inhabitant of the Land.

During this colonial period, the colonial masters succeeded in dividing and sharing Africa and Africans among themselves, exploiting the resources of Africa to advance and improve their society at the expense of Africans through trade and their imperialist style (imperialism is a system whereby the rich and powerful nations control the less powerful nation.

It describes colonial and territorial policies, it also explains economic and or military influence. It is sometimes used to describe the indirect political and economic influence of the weak states by powerful ones. I. E if the dominant country is felt in social and cultural circle.

For example, if the latest style of fashion in Britain, America and France is also in vogue in Lagos, Accra, kinshasha and lome that’s imperialism. Or a gentleman dancing on the street of Lagos, Lome, Abidjan, Accra and Nairobi to the latest music in paris, london and new york, that’s another example of imperialism).

Africa must be underdeveloped since the great powers in the United Nations security council had successfully divided Africa among themselves so that Africans can look up to their country for help.

Saddening ! Any diagnosis of underdevelopment in Africa will reveal not just low per-capital income and protein deficiencies as stipulated by the united nations, but also the young man dancing on the street of Lagos, Accra, Lome, kinshasha and Abidjan when music is played in Paris, London and New york OR A foreign investor who establish companies in Lagos, Accra, Lome, Abidjan etc and exploit the resources of Africa to advance its country. Just like, J. E Casely- Hayford, An African(gold coast) nationalist once said in 1922 “before even the British came into relation with our people, we were a developed people, having our own institutions, having our own ideas of government”

I was born into this world about two decades ago among the black race (Africa), where the heat is like a second skin in the Yoruba land. I was never born Nigerian (Nigerians are those natural slaves discussed earlier, who had been enslaved mentally by the great powers and look up to them for help. No wonder! Nigerians are smelling and packaging people. Little wonder, everyday Nigerians live in destitute, despair, pain, sorrow and poverty), I was born black and free(African) in the western part of Africa which is today known as “Nigeria”(an artificial state created by the colonial masters in the 19th century).

While I was growing up in this part of the world, I knew I will be a voice in this world, I speak my mind without fear or favor, so I deserve to be heard. I also knew I am a light in this world and I’m going to shine till the end. That was why I have embarked on my historic journey from ghetto to globe.

I met diverse kind of people from different tribes, background and origins, many of whom perceived me as been radical, some of them think I am arrogant, friendly, humorous, dull, calm, smart and industrious while majority of them perceived me as a human right activist. Often times, I got confused about these people’s perception of me even though I pay leap ears to most of their perceptions.

Like every other African child, I received an education which the contents and pattern of the curriculum is cantered and structured in the colonial style. I remember while in the elementary school, speaking my mother tongue(vernacular) in class is prohibited and attracts fine while speaking English(the colonial masters’ language) is the only generally accepted mode of communication in class.

I was given an alien name(Tawakkaltu -arabic name). All this experiences never made me see myself as an African coupled with the fact that I was confused in choosing between the religion of my ancestral forefathers and that of my some far away Arabians even though I love the holy prophet SAW of ISLAM but often times the I am confused. These confusion led me to many rational thoughts which made me rethink the past. My inquiry into the past made me realize that under normal circumstances I am truly not a NIGERIAN.

LegalEagle is a student at Nigerian Law School Abuja.

She can be reached via titilopeanny@gmail.com