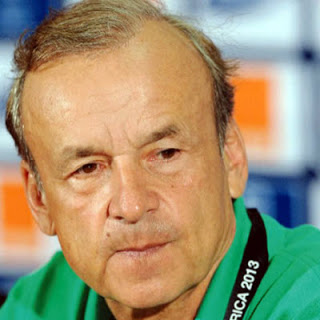 Head coach of the Super Eagles, Gernot Rohr, has said he is not scared of Cameroon, despite their performances at the ongoing 2017 Africa Cup of Nations, which has seen them qualify for the final.


The Indomitable Lions defeated West African rivals Ghana 2-0 in their semi-final clash on Thursday, to book a place in the final where they face Egypt.

Cameroon are also in the same group with Nigeria for the 2018 FIFA World Cup qualifying series and take on the Eagles in a crucial double-header in August this year.

Rohr, who is in Gabon as a pundit, hailed them a good team, but insisted that Nigeria has what it take to defeat Cameroon.

“This Cameroon side is very good, strong and hungry, but I think we have the quality and mentality to beat them to the world cup ticket. I have picked enough dossier to guide us past Cameroon,” a reliable NFF source quotes Rohr as saying, according to Complete Sports.

“I will still watch them in future friendly games and during the 2019 AFCON qualifiers in June. They are good, but I think we have what it takes to stop them and get the World Cup ticket”

Nigeria lead the group with six points after two rounds of matches, followed by Cameroon with two points. Zambia and Algeria have one point each.

Rohr’s men will host Cameroon on August 28, with the reverse fixture coming up five days later on September 2.