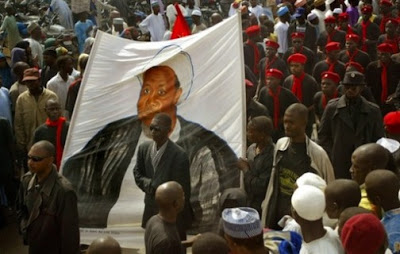 The federal high court sitting in Abuja says the Department of State Services (DSS) should release Ibraheem Zakzaky, leader of the Islamic Movement of Nigeria and Zennah Ibraheem, his wife, immediately.

On December 2, 2016, the court ordered the DSS to release Zakzaky and members of his family.

The court also ordered the police to get the IMN leader and his wife a safe place to stay.

Zakzaky has been in DSS custody since December 2015 when IMN members, also known as Shi’ites, clashed with Nigerian army in Zaria, Kaduna state.

However, in a notice by the court registrar to the DSS, Ibrahim Idris, inspector-general of police (IGP) and Abubakar Malami, attorney-general of the federation (AGF), he said if they not obey the order to release him from custody, they would be guilty of contempt.

The notice seen by TheCable which was entitled ‘Notice of Consequences of Disobedience to Order of Court’, read: “Take notice that unless you obey the direction contained in the order of federal high court of justice delivered on the 2nd December, 2016, which ordered you to release the applicants in suit no FHC/ABJ/CS/281/2016 and its sister suit no FHC/ABJ/CS/282/2016 withing forty days, inter alia you will be guilty of contempt of court and be liable to be committed to prison.

“A copy of the said order of earlier served on you is hereby annexed for your on-the-spot reference.

“This court has been informed that even as at Friday, the 20th January 2017, you are yet to comply with the lawful order of this honourable court by refusing to release th following persons namely; Sheikh El-Zakzaky and Mallama Zennah Ibraheem in your custody.

“Your are hereby directed to comply with the court order forthwith or you will guilty of contempt of court.”