A massage chair user in Japan had to make use of Twitter to plead for help after he slept off in an electrical store while enjoying his massage and woke up to find the store locked and the shutters lowered.

The man, identified only by his Twitter handle @_Asphodelus, tweeted, “Oh man, I’m locked in!” 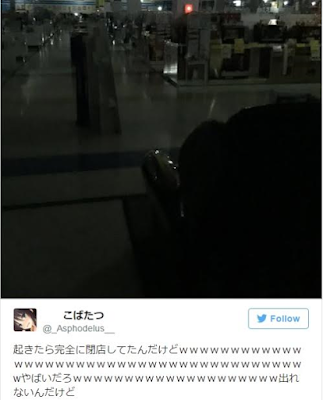 He included photos, dated 15 August, of the locked doors, which appear to show that he was stuck inside an appliance store known as Ks, operated by Ks Holdings Corporation.

According to the Twitter user, he was freed to go home after an alarm alerted the police and he had to be checked by ten police officers to ensure he didn’t steal any goods.

The store owner then apologized for not checking to be sure that no one was around before he locked the store.

“Seems the store workers [w]ere sleeping on the job,” a commenter with the handle-name Mocheake posted on JapanToday, an English language digest of Japan-related news.