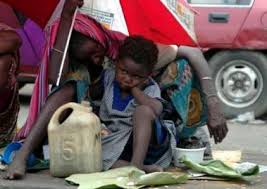 In any social order, the veracity of pluralism holds in diverse calling. Pluralism is a school of thought that clenches the universal belief of things existing in pair. In the world of algebra, Boolean is akin to pluralism. In any society therefore, this two of a kind trend exist, segregating the rich from the poor, beggars from lenders, villains from heroes, losers from winners etc. such is life in a pluralistic society.

Poverty is the bane of many African countries, including Nigeria. A report presented by the Peace and Security Council (PSC) at the AU summit in Egypt, 2008 has said that poverty fuels separatism wave in Africa. In retrospect, the report informed the need for African policy makers to prioritise anti-poverty initiatives.
According to Professor Yemi Osinbajo, 65 per cent (approximated value) of Nigerians still live below the poverty line despite governments’ intervention programmes to improve the welfare of its citizens. Today, the percentage has increased if only we would be honest with ourselves. Nigerian workers are no longer paid their monthly entitlements and other benefits as and when due in many states of the federal republic of Nigeria. Economic realities have pushed many Nigerians who were once above the poverty line, below it.

In many Nigerian states, the situations of workers are just too pathetic to behold. On top of this, many state governors have become wicked to the plights of these workers who continue to work tirelessly in spite of red bank accounts and empty money bag. Arguably, effectiveness of employees in the public service is now next to zero. Yesterday lenders have become beggars today and yesterday beggars now beg the more either wittingly or unwittingly.

In Nigeria today, the gap between beggars and lenders, the rich and the poor is just too wide. Closing this huge gap should be the headache of any responsive government. In a nation of beggars and lenders, you are either a beggar or a lender. A Lender is the privileged few who has never stolen public funds to enrich themselves but still financially capable at times like this.
It is worthy to note that those people who have enriched themselves with our money are beggars. They may be temporarily rich today but tomorrow time lag for them or their generation in indignity of pain, poverty and sicknesses. The law of karma must surely hold. For the sake of readers who are ardent positivists and optimists, I need to further explain the term begging and beggars.
Begging is an objective subject matter. In an unequivocal term, begging is the process of pleading with someone for help or favour. Begging is not exclusively limited to those who beseech on the street corner, highways and market places from passers-by. Begging is not limited to the physically-challenged-turned-beggar or less-privileged-turned-beggar. In fact, begging is a common ritual among Christians (devoted or not) and Moslems. Christians and Moslems are ‘beggars’. We all ‘beg’ God for one help or the other through supplications, petitions and worship. On that front, there is nothing wrong with begging.
A while ago, the Lagos State Government (LASG) sent packing beggars from streets, major roads and highways in Lagos just because begging has become an eyesore in a place like Lagos. I ask myself after the whole show. What are the plans of LASG for those beggars dislodged from their ancestral homes?
In Nigeria today, many public servants (Health workers, teachers, academics etc.) have become diurnal beggars. Even, in the private sector, beggars are there in leaps and in bounds. In the civil service today, there is little or no longer room for management fraud and its attendant forms of stealing. The salaries are no longer forth-coming like it used to, workers are being retrenched on daily basis due to economic realities and unforeseen contingencies keeps getting out of bed. The only sacred option is to beg instead of stealing from the common patrimony.
Though, many public servants are in this predicament of ‘begging stylishly’ because of poor saving culture, misplaced priorities and poor planning. Of course, beggars are slaves to their lenders.

More, many Nigerians have become temporary or permanent slave due to government’s inadequacies and economic realities. The 2016 national budget padding is a reflection of how desperate some beggars could be. Per Diem, many have resorted to the business of begging just to eke out a paltry living. On the other hand, it is a blessing in disguise because it has taught the “begging” public and private workers not to use the whole of the ten fingers to eat anymore. Notwithstanding, Government at all levels should take workers’ welfare more seriously. After all, it is one benchmark of measuring good governance.

Most unfortunately, some of our so called ‘religious leaders’ are now real time beggars. In the name of religion, many atrocities have been committed by ‘servants of God’. Many religious rituals have been commercialized by our so called Pastors, Prophets, Evangelists, Imams and Alfas. One of the best ways of gaining access into a man is through his belly. Because of the belly, lies have been told against God, the Holy Spirit has been grieved severally. Because of the belly, the spirit of hunger is now the driving force, no longer the Holy Spirit. At times like this, these are the fruits.
In the annals of Nigeria history, there was a time when higher education certificates such as B.Sc., M.Sc., HND or even NCE were regarded as “meal-ticket”. Then, holders of such valued certificates were believed to have passed the poverty line. In our day, the reality of time immemorial is no longer plausible. Many graduates with such valued credentials in sundry profession have become first class beggars.

In a survey recently conducted by the Nigerian Chartered Institute of Personnel Management (CIPM), it has discovered that the high rate of unemployment in Nigeria is not due to paucity of Jobs as popularly thought but that: a lot of our graduates are just not employable. This critical unearthing which holds a little truth, boils down to the poor quality of Public education in Nigeria. Our educational system is also begging.

Alas, graduates don’t want to beg. It is overt, many of them hate to beg but who will save them from situations that act against their popular wish? The 2014 immigration Job screening turned National scam is a proof of their tenacity to cross the threshold of poverty as specified by the United Nations. Again, when will they become responsible citizens?

The people should be the concern of any humane government. The government should always ask themselves some basic questions in the course of governing the governed.  How many people are eating from the National cake? Are youth empowerment programmes sufficiently transparent enough, accountable to a fault and reaching the right beneficiaries? What are the yardsticks used by government at all levels to share the dividends of democracy if any?
A report in 2014, as carried out by the Nigeria Security and Reconciliation Programme, NSRP has reported that 79 per cent of Nigerian youths feel that only those close to politicians benefit mostly from seldom youth employment and empowerment interventions. The government of the day needs to prove this otherwise with more proactive measures.

Many factors have enlarged the number of beggars in the country. There is time for everything. This is time to get more serious with the herculean task of governance, not the time to pass the buck when the ticking clock does not trudge. This is the time to pay more attention to; worker’s welfare, continued increase in unemployment, high rate of poverty on mother land, the fight against corruption and everything that speaks badly of us as a nation-state. This Buhari led presidency surely has a lot to do in a country of fewer lenders and plenty beggars. May God help him.
Orukotan, Ayomikun Samuel, a graduate of Electrical and Electronics Engineering from the Federal University of Technology, Akure, writes from Ondo

Views expressed are solely that of author and does not represent www.omojuwa.com nor its associates