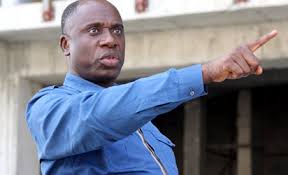 Rivers State Governor, Rotimi Amaechi, has said nobody can stampede him out of the Peoples Democratic Party.

The governor also said he did not have to tell President Goodluck Jonathan or anybody about his ambition before contesting any public office.

Amaechi, who said he had yet to declare his ambition to contest the Vice-Presidency in PDP, spoke in an interview monitored on the BBC programme, Hard Talks, on Thursday.

He said, “You see what you must know is that I believe in the rule of law. Let’s even assume, for the purpose of argument, that an ambition exists, nobody has the right to bring down a state just because an ambition exists.

“It is important to say clearly that everybody should allow 2015 for 2015; it is a bit too early. The President is elected to preside as the President of the Federal Republic of Nigeria, and I support that and I want everybody to allow Mr. President to preside over the country for the interest of the country.”

According to Amaechi, there are people around  Jonathan, who abuse and compromise power.

He added, “When the Financial Times reporter interviewed me in Port-Harcourt, I did make that clear. That was the day some hoodlums were hired to stone some northern governors, who visited me to show solidarity.”

On the crisis rocking Nigeria Governors’ Forum, Amaechi said he won his election against Plateau State Governor, Jonah Jang, who many believed had the backing of the presidency against him.

Asked why he did not tell Jonathan about his intention to contest, he said, “Nobody told me not to run. I challenge anybody. There is no law that requires me to tell anyone that I was going to run.

“That is the freedom we are looking for in the Nigerian Governors Forum. I didn’t need to go to Mr. President to tell him that ‘Mr. President, I want to run for the office of the chairman of the Nigeria’s Governors Forum’. I didn’t have to do that and I didn’t do that. And he, in turn, did not tell me ‘don’t run, I heard you are going to run’. So, I ran, and I didn’t see the President on the ballot, the person I saw on the ballot was Jonah Jang.

“The result was clear that 19 governors voted for me. He didn’t object to the fact that I won.”

On the demand by Minister of State for Education, Nyesom Wike, that he should leave PDP, Amaechi said, “He (Wike) doesn’t have the right to tell me where I should belong to whether I want to belong to the PDP or not. He doesn’t have that right. We have all been in PDP.