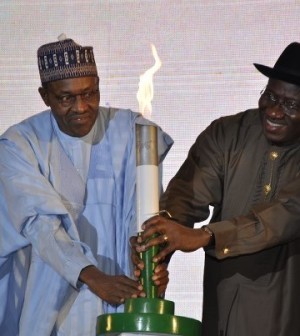 The All Progressives Congress, APC, presidential aspirant, Gen. Muhammadu Buhari, warned, yesterday, that the ruling Peoples Democratic Party, PDP, was gradually destroying the nation with the sustenance of the culture of corruption and impunity.

He also said Boko Haram insurgents, kidnappers and armed robbers could over-run the country, if the Peoples Democratic Party, PDP, was allowed to rule Nigeria for another four years.

Buhari spoke in Asaba, Delta State and Yenagoa, Bayelsa State, at a meeting with APC faithful to woo delegates for party presidential primaries.

Speaking at the APC’s Secretariat in Yenagoa, he urged Nigerians to vote out the ruling PDP and end the era of corruption that had threatened the foundation of the nation.

He said: “What is wrong with Nigeria? What is wrong is massive corruption. And the commentators have said it, written about it, and I believe them, if we don’t kill corruption in Nigeria, corruption will kill us. If Nigerians make the wrong choice as they have done since 1999, they will pay the price.

“If you want to know how much we have been suffering for the last 15 years under the PDP, try and imagine what our condition was in 1999. We will use the Nigerian Shipping Line, and the Nigerian Airways. The roads were not too bad.

“The most important among these, I suppose, was the industrialization. The creation of jobs, goods and services through what was called National Electric Power Authority, NEPA or Power Holding Company of Nigeria, PHCN.

“But after spending so much dollars, we are still where we are. Nigerians have abundant resources. God has endowed us with petroleum and some mineral resources, a lot of land for farming. But the educational standard has gone hay-wire. The infrastructure have gone. The institutions, I have just learnt, have disappeared. If you find out how much we have earned till date, you will be amazed,” he said.