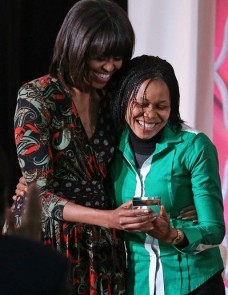 Joe Okei-Odumakin was in Washington last week to be honored along with other exceptional women of courage from across the world. When she mounted that podium and was greeted admiringly by US First Lady, Michelle Obama, and US Secretary of State, John Kerry, she did not do it for herself and her children. She did not do it for her husband, my good friend Yinka Odumakin.

We have produced nearly two generations of Nigerians who are not familiar with the path that Joe Okei-Odumakin trod from Lagos to Washington. In my opinion, mine is the last generation still in possession of vague memories of the receding tail lights of such a path from Nigeria’s national life. We came of age when the Nigerian spirit and character were still defined by the dual concepts of personal capital and the personal example. Those were the two building blocks of our national ethos. The operative metaphors of our national life and identity revolved around certain keywords which, today, make Nigerians who fall roughly in the 40-60 age bracket to indulge in a daily ritual of teeth-gnashing nostalgia.

The coming of age of this generation (now 40-60 years-old) coincided with the agonal respiration of such keywords as merit, honesty, probity, integrity, service, hard work, dignity of labour, and selflessness, all of which defined a sufficient number of Nigerians across the country to form what was recognizable as our national spirit, our national character. If you are a Nigerian in the aforementioned age bracket, just think back to your years in elementary or secondary school and tell me what happened when your father or mother found you in possession of a five kobo coin whose origin you could not satisfactorily explain. Some thirty or forty years later, I am sure your buttocks still have warm memories (pun intended) of the day you failed to explain the source of your five-kobo “sudden wealth” to your father.

If you look at things closely, the job of instilling these values in you, of building your character with the aforementioned blocks, was made easier for your parents by the reinforcement you got away from home. It wasn’t just that your teachers operated from the same template at school and reinforced the training at home. It was about our national space and our public sphere: both boasted credible role models and heroes who were the sum total of these values. From home to school; from school to the national public sphere, what guaranteed your rise to the top, secured your upward mobility, and defined your space and place in the hearts and minds of your compatriots were merit, honesty, probity, integrity, service, hard work, and the selfless energy with which you put these attributes and your other God-given talents to work for the progress of your country and the upliftment of your compatriots.

The role model was central to this picture. At the local, state, and national levels, role models were the characters your parents and teachers pointed to as they taught you that there was no alternative to merit, honesty, probity, integrity, hard work, and, above all, selfless service to humanity. Role models were people you saw at the apex of their game and you knew that the recognition society accorded them was merited because the path they trod to success, to accomplishment, was not crooked. You wanted to grow up to be like your role models.

How this version of Nigeria survived the military usurpations of the 1960s and 1970s with rather minimal damage requires deeper analyses beyond the brief of this treatise. However, it is precisely because this version of ethos-driven nationhood survived military coups and a disastrous civil war that my generation witnessed it. Sadly, we were a transitional generation. We witnessed this Nigeria on her way out of the scene. Indeed, we were unlucky to be living witnesses of the deleterious social engineering performed on national mores by the generation of military rapists who came in the 1980s. Conventional wisdom singles out Ibrahim Babangida as the principal culprit. He it was who introduced “settlement” and other amoral shortcuts to success, social climbing, and arrival.

We must not make the mistake of thinking that institutionalized corruption in the shape of massive plundering of the treasury is the greatest damage done to Nigeria by the soldiers who raped our 1980s and maimed our 1990s. The greater damage was in their social engineering. As corruption, looting, settlement, and plain dishonesty became the surest pathways to success, to “making it”, the saliva dried up in the throats of parents and teachers clinging stubbornly to the old ways of raising young Nigerians across the country. Quite frankly, by the time the 1990s set in, it had become plain foolish, if not downright stupid, for parents and teachers to continue to sell merit, honesty, probity, integrity, service, hard work, dignity of labour, and selflessness as the pathways to success and “making it” when national ethos had been put on automatic gear in the opposite direction by the military social engineers of the day. Under this dispensation, Nigeria’s pool of credible public role models began to dry up.

It is, of course, now very clear today that the military traducers of the 1980s and 1990s were in fact small boys in the business of social engineering when you compare them with the civilian rulers that have so tragically happened to Nigeria since 1999. Ironically, where the soldiers assaulted our national character and values using dane guns, their civilian successors went to work using fighter jets and laser-mounted drones. This, of course, is not the place to run through a laundry list of our colossal loss of national values and ethos under the most useless bunch of civilian rulers ever to happen to any country on the face of the earth. Suffice it to say, however, that it might take five generations for Nigeria to recover from Goodluck Jonathan’s wholesale assault on personal capital, the personal example, and all the barometers with which we once measured success, accomplishment, social climbing and arrival.

If his military and civilian predecessors grievously wounded all the ingredients of our national character (merit, honesty, probity, integrity, service, hard work, selflessness, etc); if they began the process of euthanizing the public role model, Goodluck Jonathan, ever since tragic fate inflicted him on Nigeria, has behaved like the Chosen One, anointed prophetically to administer the coup de grâce. With him, it is one deathblow after another deathblow on core national values and morals. Youths who came of age in the 1990s and the 2000s look around them and the examples of success they are given in Goodluck Jonathan’s Nigeria range from overnight billionaire prosperity pastors to Government-dependent billionaire businessmen whose wealth cannot be explained; from billionaire half-illiterate retired militants to suddenly-wealthy political aides and appointees of no known provenance. And this travesty of role modelhood is replicated in the states and local governments. Only a hypocrite would stand up in Nigeria today and preach honesty and hard work to the youth as the pathways to success. They will likely pick up Goodluck Jonathan’s National Honours List and ask you to show them who made it to the said list based on the criteria you are preaching.

This is the broad background and history against which we must evaluate and appreciate the significance of Joe Okei-Odumakin on that world stage of honour in Washington. Joe Okei-Odumakin’s life, the story of her struggle for Nigeria, and her service to humanity, are all public knowledge. I do not need to retail her biography here. However, I must return to my initial mention of the path she trod from Lagos to Washington. It is the path of merit, honesty, probity, integrity, service, hard work, selflessness, and total devotion to the advancement of civil rights, women’s rights, and social justice in Nigeria and Africa. These are not attributes that could get her to the National Honours list in Nigeria  –  perish the thought, anyway, that a woman of such outstanding integrity would keep the company of the kind of characters who make it to the honour stage in Abuja  –  but see where they got her in the eyes of the world and in the hearts of the Nigerian people.

Joe Okei-Odumakin, resplendent on that stage, with a beaming Michelle Obama and John Kerry, says so many things to Nigerian youths. Her presence on that stage is the most powerful vote for merit, honesty, probity, integrity, service, hard work, and selflessness to come out of Nigeria in recent times. What Joe Okei-Odumakin says is that these are really the attributes you need to “make it”; that it is still possible to “make it” this way, despite the message you receive daily to the contrary from the torrential bad examples of Goodluck Jonathan, his aides, Ministers, Senators, Reps, Governors, and the like. Think about it this way: what will be remembered of these characters who hold out ostentation, looting, sudden and unexplained wealth, crass materialism, and the pardoning of corruption to our youth as markers of arrival? I tell you, these characters will not qualify for admission into the dustbin of history when posterity begins its inevitable task of inscribing memory.

Joe-Okei Odumakin also tells us that despite the sustained violence of military rapists and civilian undertakers, the Nigerian role model has survived. We can always point to her on that stage and tell our youth about promise, about possibilities, about dreams. We can point to Joe Okei-Odumakin on that stage and teach our youth that no weapon fashioned against truth and steadfastness prospers. Here is a woman that the corrupt characters setting bad examples for our youth denounced last year. They said that she, along with her husband, Pastor Tunde Bakare, Femi Kuti, Seun Kuti, and other genuine heroes of our people, bribed the victims of their wickedness with bottled water and comedy performances during Occupy Nigeria. Well, apparently, those who have other ways of evaluating service to humanity and genuine heroism disagree with the conclave of the corrupt in Abuja.

In Washington, she stood on a stage and was feted by people who frequently have to verbally spank the moral Lilliputians of Abuja because of their corruption. What a spectacular way to restore the idea of the role model for our youth. What a significant re-energizing of the value of personal capital and the personal example. I salute this great daughter of Nigeria. I salute this extraordinary daughter of Africa. May the symbolism of her presence on that stage translate to an inspired and re-energized youth in Nigeria. Doctor Joe would love nothing more than that!