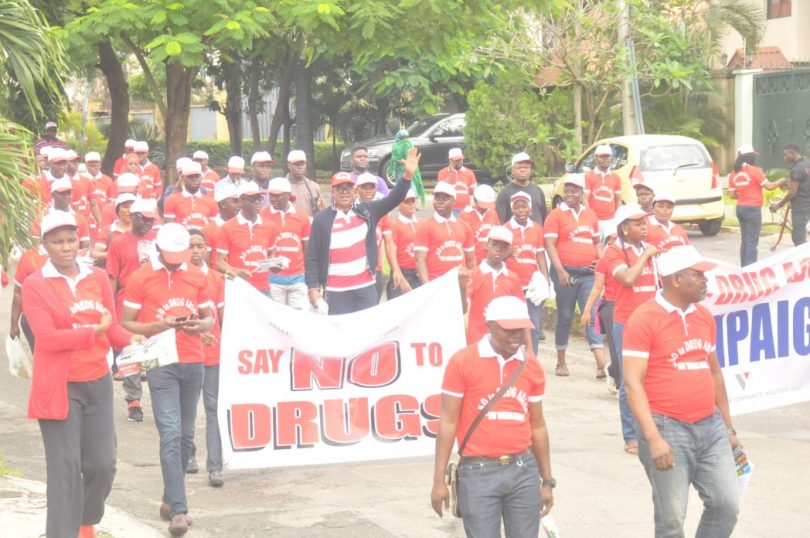 The Senator representing Lagos East Senatorial District in the National Assembly, Senator Gbenga B. Ashafa has expressed concern over the increased rate of drug abuse among youngsters and advocated a community based approach as the best way to tackle the menace of drug abuse in our country.

Ashafa made this call at the Magodo ResidentS Association, Valley View Zone’s, sensitization march against drug abuse in their community. The event which took place on Saturday, 26th August 2017, at the secretariat of the zone had in attendance the residents and advocacy groups united in the fight against the scourge.

Other contributors at the event include the chairman of the Valley View Zone residents association Mr. Olatunji Solarin and the guest speaker Dr. Dokun Adedeji, the National coordinator of CADAM- Christ Against Drug Abuse Ministry, who also spoke extensively on the prevalence of drug abuse and ways to prevent it in the society.

In his words, the Senator Stated that “the scope of drug abuse has now transcended beyond popular narcotics and alcohol, youngsters have also found refuge in the abuse of over the counter and prescription pills/medications at an alarming rate.”

Speaking further, Ashafa stated that “This nagging concern inspired me to sponsor a motion on the floor of the senate on “Nigerians involvement in illicit Global Drug Trade and increase in Domestic Abuse by Nigerian Youths” and a “Bill for the amendment of the Nigerian Drug Law Enforcement Agency Act”. These legislative interventions seek to ensure that we overcome the menace of drug abuse in Nigeria.”

He however expressed optimism in the community-based effort in tackling drug abuse when he stated, “I am even more optimistic in the fact that Charity begins at home. I therefore call on all parents, guardians and caregivers to educate our children on the ills of drug abuse. We must also pay closer attention to the habits being picked up by our children and wards not only as a family but also as a community. We must be ready to inform our neighbours of whatever strange mannerisms we notice in each-others children because community effort is a more effective means of preventing the spread and continuity of Drug Abuse.”

He concluded by stating that, “My advice therefore is to remind us that in Africa, “it takes a whole community to train a child”.