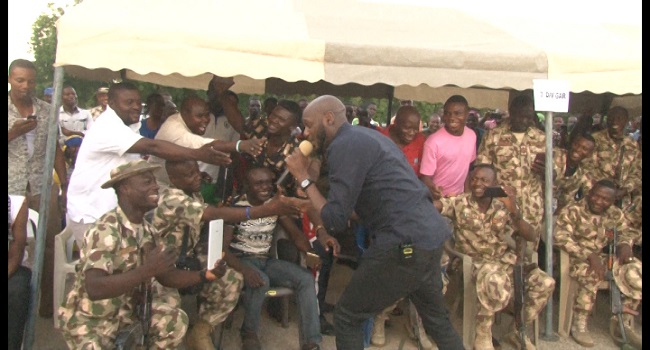 Popular musician Innocent Idibia also known as Tuface who is on a tour in Borno where he thrilled the troops and dedicated a song to the IDPs.

The African Queen crooner commended the Nigerian Army for the gallant fight they are putting in the counter insurgency war.

Tuface who is the ambassador of the UNHCR has been on a tour in Borno state interacting with displaced persons in Ngala and camps around Maiduguri.

The partnership between the United Nations High Commissioner for Refugees and ace singer Tuface Innocent Idibia is to give a voice to happenings in northeast Nigeria. The entertainer also met with soldiers of the Lafiya Dole operations at the 7Division Maimalari Barracks where he conveyed his appreciation to them for their sacrifices.

While commending the troops, Tuface said: “What you guys are doing is wonderful putting your lives on the line for the nation is something that you cannot be compensated enough for.” He told the excited soldiers.

“It’s not easy what these guys are doing, I give them kudos and I ask every Nigerian to give them all the support they can give. I am impressed that we have able bodied men and women that are willing to put their lives on the line for Nigeria.”

He says although the humanitarian crisis is devastating, the unrelenting efforts of the soldiers has also given hope to the affected population who are most keen on returning home to live normal lives again.

The Chief of Staff, Division, Bridg. Gen. John Ochai noted that he believes in the service to humanity and his nation that he is here to boost the morale of soldiers of Operation Lafiya Dole we can’t thank him enough”.