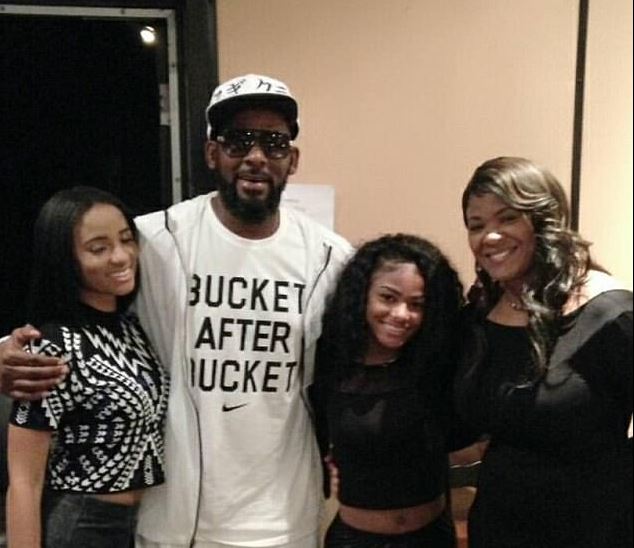 A 21-year-old woman whose family made sensational claims that she was being held against her will by R&B singer R. Kelly spoke out on Monday night to insist she is safe and well.

Jocelyn Savage came forward after watching her mother, father and sister hold a press conference earlier on Monday during which they claimed she was being held by Kelly at a home in Atlanta.

They said she was one of many young women who the 50-year-old singer had targeted in recent years and that they hadn’t spoken to her for months.

Dismissing their claims that she had been ‘brainwashed’ by Kelly – who has been plagued by accusations of child sex abuse in the past – Savage told TMZ that she was ‘in a happy place’.

‘I’m 21, I’m about to be 22 in a few days and I just mainly want to say that I am in a happy place with my life and I’m not being brainwashed or anything like that.

‘It just came to a point where it definitely has got out of hand. I’m totally fine. I’m happy where I’m at and everything is OK with me.’

Jocelyn Savage, 21, came forward on Monday to say she was ‘totally fine’ despite her family’s claims she was being held against her will by R. Kelly

Though she insisted she was ‘fine’, she refused to answer when asked if she was free to come and go from the house.

She also refused to answer when asked if she was still in Atlanta, Georgia.

Savage’s parents took part in an interview with BuzzFeed on Monday which aired worrying allegations that Kelly had been holding a handful of young women in cult like conditions and effectively treating them as his sexual slaves for years.