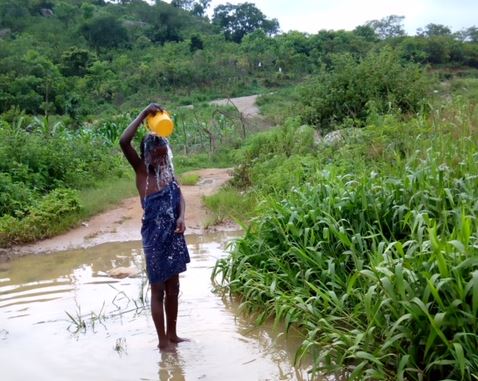 Miracle, age 9, lives in Gishiri, has a daily routine of fetching from a nearby pond. “My mum asked me to come fetch and bath” she said, standing beside her was her friend who was bathing from the unclean water with her uniforms on.

Both girls reside in a community located at the heart of Abuja between Maitama and Wuse 2 district of the Municipal Area Council within? the growing metropolitan city of Nigeria. In Gishiri, children are often responsible for collecting rainwater to help their families after school.

Like Miracle, Deborah, 10, her friend also tells me that their drinking water in that community comes from wells, hand-pumped water boreholes or even the small stream where they were bathing.

Leading me through a garbage heap of human faeces in polythene bags, she smiles at me and adds that she wants to become a medical doctor. The unhygienic condition of her environment stands in sharp contrast to the well-planned roads and flyovers that demarcates her community to Ministers Hill in Maitama District – Most people who live in Maitama are diplomats, ministers, influential Nigerians and the Ministers hill end of the area is the exclusive preserve of the money bags. Miracle is the third child in a family of five.

Nigeria is ranked third after India and China among countries whose major population lacked access to portable water and for Deborah, it is more about her parent’s inability to afford well water, which in itself is not so portable. “This is the only water my mum can afford, the other one sold in jeri-can is expensive for us”, Deborah a Primary 5 student from the local school said.

Pointing to what looks like a water pond covered in grass, she said, “I have to come here and bath – last year a 10 – year-old boy drowned in this water”.

Deborah also depends on the stream for her water needs – the poverty stricken slum located amidst opulence is a reminder of what life looks like for residents of these communities who work in neighborhoods with trimmed lawn, air-conditioned offices but can only afford Gishiri.

Because of its location within the heart of Abuja, one bedroom apartment in Gishiri costs between $1,500 per annum to $1,800 – the location of the community estimated to host about 500,000 residents is regarded as Abuja most sought after location for civil servants and low income earners.

Leading cause of child death is diarrhoea, a majority of which is water-related, and according to the World Health Organisation, diarrhoea disease is the second leading cause of death in children, and is responsible for killing around 525 000 children every year. As Miracle hopes to become a medical doctor someday, the stream she visits almost on a daily for her water needs will likely end that aspiration – and the aspiration of many other kids forced to survive in inhuman conditions while they watch their peers live in luxury.

A recent report by Partnership for Advocacy in Child and Family Healthy estimated that 63 million Nigerians lack access to potable water – undeniably residents of Gishiri and importantly, Miracle and her friend Deborah IF captured by that report fall under the number of the vulnerable in the Nigerian society that are likely to die as a result of preventable water-borne diseases.

Abuja’s development has remained non-inclusive for even those within its reach – Abuja is named among the 20 most rapidly expanding cities (in terms of population) with at least five million residents, according to the United Nations 2010-2020 rates (data supplied by demographia.com).

Amidst that growth is the absolute disregard for its rural dwellers “we don’t think we are in Abuja – we watch the big men rise along their skyscrapers”  – Godiya Shem, 33, a primary school teacher in Gishiri.

For those who can afford it, “we depend on Maruwa (well water sold in Jeri cans) and others go to the stream for their water needs as you can see”.

For residents of a community situated within same location as Maitama and Wuse 2 to be dealing with water challengers, it tells of the growing inequality between the poor and the wealthy within Nigerian societies.

When questioned when he was the Minister of the Federal Capital Territory, Mr Nasir el-Rufai, now governor of Kaduna state was widely quoted to have said Abuja was “not a city for the poor”. The 2013 Nigeria Demographic and Health Survey report revealed that 97,000 children die yearly from diseases due to unsafe water and poor sanitation.

For Mr Shem who moved into Gishiri five years ago, the need for government to build infrastructure for the elites, the middle class and the poor should be the priority of Government – “the responsibility of the poor taking care of themselves seems to have been left for the poor”. He questioned how a system that pays civil servants 18000 Naira ($50), as minimum wage wants such an individual to afford the high rents costs the luxury apartments of Maitama.

Mercy Abang is a Freelance Journalist, focusing on development Journalism – She doubles as a media fixer with Sunday Times of London, BBC, Aljazeera and a former Stringer with the Associated Press – She tweets at @abangmercy.. She is the 2017 United Nations Journalism Fellow and budgIT Media fellow for 2017.