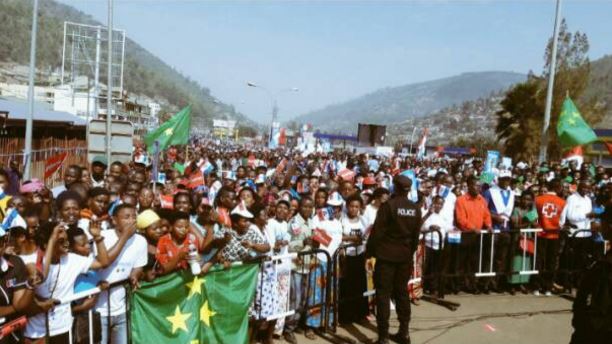 A Rwandan journalist has been tweeting from a political rally in the suburb of Kicukiro in the capital, Kigali, where President Paul Kagame is campaigning ahead of the 4 August election.

He tweets that Mr Kagame, the candidate of the governing RPF party, has been urging supporters to vote early “before sunrise”:

He also shared this video of an RPF supporter with an aeroplane model emblazoned with Tora Kagame Paul which means vote for Paul Kagame.

Two other candidates are vying for the presidency. Frank Habineza of the Democratic Green Party of Rwanda and Philippe Mpayimana, who is an independent.

Mr Kagame, who has been president since 2000, is seeking another seven-year term.