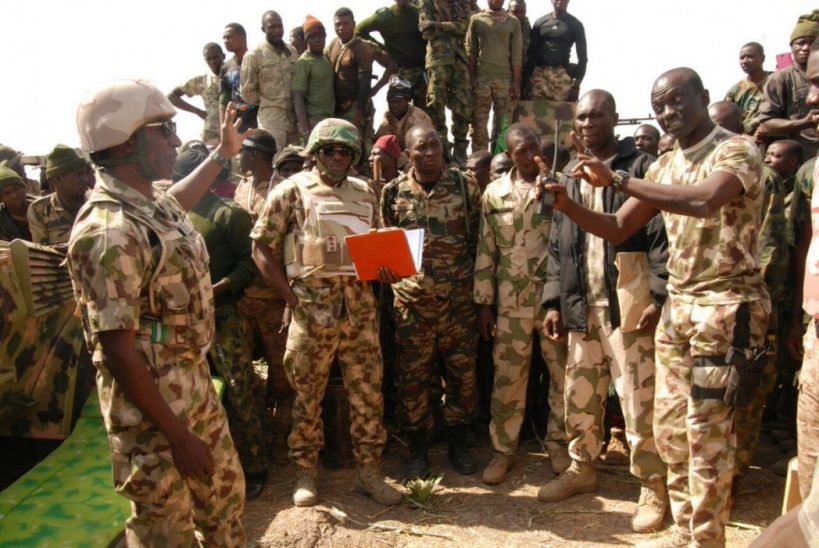 Troops of Operation LAFIYA DOLE have in the past few days intensified efforts towards checkmating suicide bombings in Borno State of North East Nigeria.

Troops recorded huge feats in foiling suicide bomb attacks by neutralising not less than 8 female suicide bombers who were unleashed by remnants of desperate Boko Haram Terrorists (BHT) to cause mayhem to civilian populace.

The Nigerian troops floodgates of interceptions of suicide bombers are glaring as a female suicide bomber was neutralised by troops of 251 Battalion of 7 Division Garrison of Operation LAFIYA DOLE on Sunday, 23 July 2017 by 8:15 pm while trying to infiltrate through the fence of Dalori Internally Displaced Persons (IDP) Camp 2 within Maiduguri Metropolis in Borno State.

The successes so far recorded have been possible with the active collaboration of the Nigerian Police Force, Department of State Services, the Civilian Joint Task Force, vigilantes and other security agencies. The security forces have reinforced security as well as stepped-up aggressive patrols within and outside Maiduguri metropolis while also reinforcing security at the University of Maiduguri.

Remarkable and commendable has been the increasing information and tip off volunteered by well meaning members of the communities that are helping in the capture of these suicide bombers recently. Apparently, Boko Haram Terrorists have been greatly decimated hence their desperation and resort to the use of innocent young female suicide bombers in perpetuating their inhuman dastardly and criminal acts. Their ploy is an orchestrated propaganda towards creating panic and fear in the minds of the innocent citizenry. And to lay hold to the claim that they are still a potent force to reckon with as they bask in euphoria of getting cheap popularity at the expense of peoples lives. The antics of the remnants Boko Haram Terrorists is now common knowledge to the Nigerian public who are now resolved to end the menace.

Nigerian troops of Operation LAFIYA DOLE are constantly working in tandem with other security agencies to halt suicide bombing within the Theatre. The general public is therefore please requested to be vigilant and report unknown and suspicious persons in their midst. Please “IF YOU SEE SOMETHING SAY SOMETHING”. Please do not relent to continuously avail troops of Operation LAFIYA DOLE with useful information that will assist in the capture of suicide bombers and their Boko Haram Terrorists perpetrators before they carry out any dastardly act.