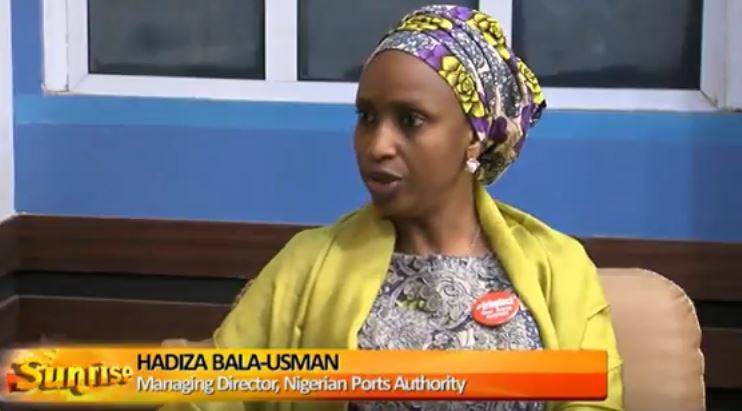 The MD of the Nigerian Ports Authority, Mrs Hadiza Bala Usman has said that the ongoing reforms at the ports were inevitable.

She made this known in an interview aired on Channels TV’s Sunrise. She reiterated that the ongoing reforms, if not carried out, will have a catastrophic effect on Nigeria’s recovering economy especially the maritime sector which happens to be one of the biggest contributors to the country’s revenue.

Mrs Usman who also called for better inter-agency collaboration, described her journey into being the MD of NPA as an interesting and challenging one.

She said, while responding to questions on the show; “We’ve been able to institute several levels of transparency in our operations and we have also been able to enhance the capacity of operation in ports within one year but it is a journey and we have started the journey and we look forward to deploying more and providing efficiency within our port operations within the tenure of our appointment.”

Responding to the question about her age in comparison to the task of heading such a huge sector of the economy like the maritime, she said; “I felt that I have been challenged. I have been given an opportunity to to show the world and indeed to prove to Nigerians that a woman is able to deliver on any task given.”

On the need for better inter-agency collaboration, Mrs Usman said; “Within the port operations, I would like to provide clarity on the roles of agencies. For example, for every person that his cargoes does not reach his warehouse or where he wants it, he just thinks about Ports Authority but there other agencies of the government that are actually indeed within the operation that facilitates the clearance of your goods.”

“Our role primarily is to provide habour operations and berthing services. We facilitate the entrance of the vessels from the fareway to offload. From that point henceforth, it is really the other agencies of government like Nigerian Customs Service, Nigerian Immigration Service and all those agencies saddled with the responsibility of cargo clearance. Once the cargo has reached it destination at the terminal, that is the task of the NPA. However, there is need to collaborate and work together even beyond our scope of responsibility.”

She further talked about the presidential order to reduce the amount of government agencies operating at the ports and how much efforts have been invested in the fight against corruption amongst port officials.

Also, she revealed that the NPA is taking a step further in ensuring that it does not deal with the responsibility of imports alone but also exports and that is why the NPA has designated some ports for the export of agricultural products and solid minerals.

“Towards the end of my tenure as MD of NPA, I would love to leave behind a legacy of efficiency and entrenching transparency in our operations,” she concluded.