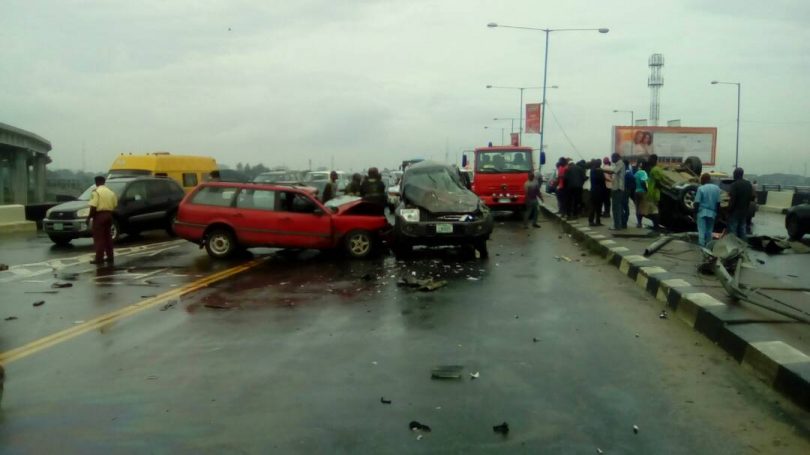 They were reportedly saved by an undergraduate of the College of Medicine, University of Lagos, Jemima Osunde.

It was gathered that while Osunde was busy with rescuing the victims and putting them in her car en route to a hospital, some other persons who pretended to be sympathisers made away with valuables from the wreckage.

Operatives of the Rapid Response Squad, who responded to the emergency after the medical student made a distress call, allegedly abandoned the victims at the hospital.

In a series of tweets shortly after the incident on Sunday, Osunde described the crash as “the most terrible thing” she had seen.

She said, “I watched the most terrible thing happen today; an accident on Eko Bridge. The car in front of mine somersaulted to the other side of the bridge and crashed into two cars. One of the victims came out of the car himself, while the other two were trapped in their cars.

“Thankfully, some men helped to bring them out. Two had injuries on their heads; one of the men literally had his head split open, and was bleeding profusely.

“I called the rapid response number, 112. Unfortunately, they were not as rapid as I expected and I couldn’t stop the bleeding. So, I got the policemen to take two of the victims in their car and follow me as I took one in mine.

“I took them to LUTH where I am schooling. The Accident and Emergency Unit at LUTH tended to the victims and they are still receiving treatment.”

She said she looked through the driving licences of two of the victims and was able to get information on their blood groups and genotypes, adding that she also contacted their families on the telephone.

Osunde said she got in touch with the managing director of the company of the third victim after using the Google search engine.

“While all of these were happening, I had no idea that the police officers had left me at the hospital with these three men that I didn’t know. Another thing that fascinated me was when an officer complained about the bloodstains on their car seat.

“My fellow Nigerians, who also got out of their cars at the scene on Eko Bridge, only did so to take pictures and make videos.

“Some people also got away with the victims’ phones, wallets and money. But thankfully, they left behind their cards and licences from the crashed cars,” she added.

Among many Nigerians who commended the courageous act of Osunde was a former Minister of Education, Oby Ezekwesili.

“Jemima, you cannot imagine the depth of joy and hope that your selflessness, written in this thread, gave me; eternal blessings.

“There’re many among us who have tucked away their kindliness just because they fear that it would bring them trouble. Emulate Jemima Osunde,” she tweeted.

The wife of Pastor Sam Adeyemi, Senior Pastor of Daystar Christian Centre, Nike Adeyemi, said, “Well done for this act of compassion and courage. This should be our lifestyle.”

The state Police Public Relations Officer, ASP Olarinde Famous-Cole, said the policemen should not be blamed.

He said, “It is not today that police started doing that. The practice is that when they rescue victims, they hand them over to a hospital, doctor or nurse and go back to protect lives and property.

“They are not the doctors that will treat the patients; they must go back to the field to do what they know to do best. What else do you want from them?”