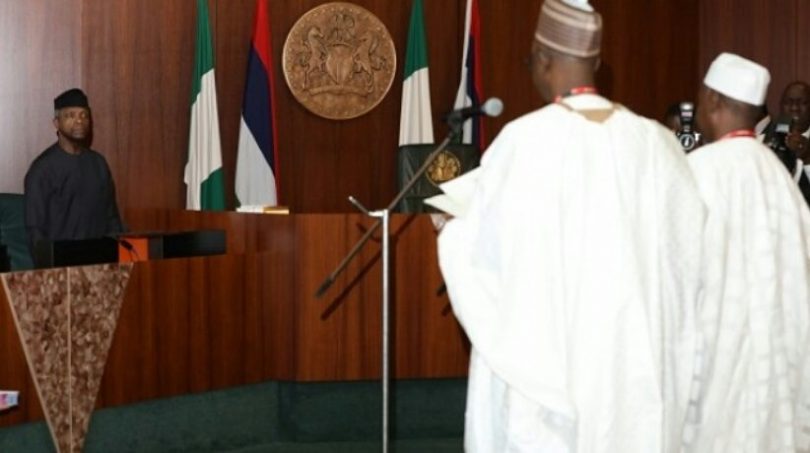 Acting President Yemi Osinbajo on Wednesday inaugurated Professor Stephen Ocheni (Kogi) and Alhaji Suleiman Hassan (Gombe) as ministers, urging them to be part of the herculean task of turning the nation around.

Osinbajo affirmed that Ocheni and Hassan, by their antecedents, are evidently capable of being ministers of the Federal Republic of Nigeria.
The acting president equally warned the entire cabinet against misconduct, saying service could only be delivered if there is honesty and integrity.
He charged cabinet members to be exemplary in their conducts not by words but by practice, especially in the anti-graft war.
The acting president asked Ocheni and Hassan to key into the administration’s economic reform programme as well as the fights against insecurity and corruption.
He said all ministers were expected to focus on the key areas President Muhammadu Buhari highlighted during the election campaign which, he noted, the government believe would make a difference in the economy and in the lives of Nigerians.
Osinbajo said the government had made tremendous progress on security, admitting however that there were issues and challenges.
He stated: “On the anti corruption fight, we are focused, we believe that the primary thing is for those of us who have the privilege of serving to ensure that by our own points and actions we support the anti-corruption fight and also that our conducts will be exemplary so that we will show, by practice not just by words, that we are determined to ensure that this country is run by a good government.
“And where there is honesty and integrity, service will be delivered. Even as I welcome you to this cabinet, I congratulate friends and family who are here and I can only say going by your antecedence as contained in your resumes read out, it is evident that you are deserving of positions held in the Federal Republic of Nigeria and that you are capable of rendering all the task that will be given to you.
“The only reward is more hard work and I wish you the best as minister of the Federal Republic of Nigeria. We welcome you to the Federal Executive Council where you have just been sworn in from being ministerial nominees, to ministers of the Federal Republic of Nigeria. The portfolios will be announced shortly. From this moment they will join the Federal Executive Council and will sit in our meeting this morning. So, Prof. and Alhaji, you will not have time to celebrate much this morning. You will have full meeting today.“

Meanwhile, the FEC meeting is still ongoing at the moment.