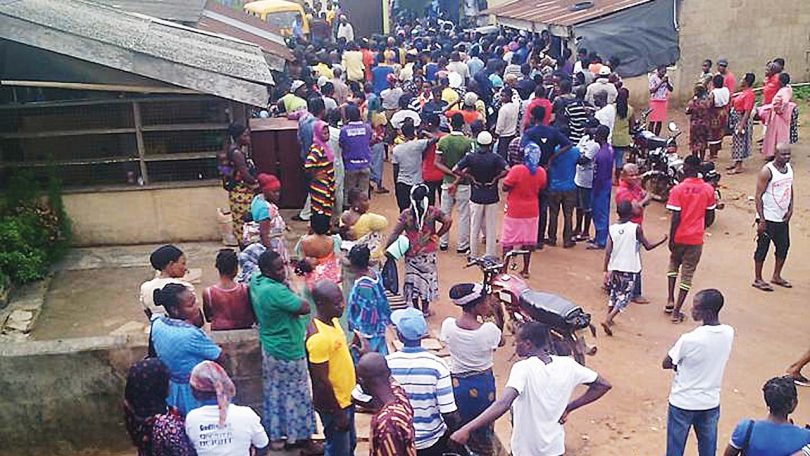 Report has it that an attack by a suspected member of the notorious cult group, Badoo, was averted on Eyita Diasi Okeowo Street in Ikorodu, Lagos state last Friday, July 14 2017.

This is according to the information shared this morning through a Facebook page, Ikorodu Ambassadors.

“We are so sorry that this is coming a bit late. Now this is not to create Panic or Fear. Rather, it’s an Awareness that we need not deter from our Vigilance, we need to be Security Conscious and be Watchful.

A Reliable Source sent this to Inside Mainland:

“Glory be to God for saving us in our area from the attack of BADOO GANG yesterday, 14th of July 2017.

These pictures of cloth and mortar you see here was found where a Suspected Badoo Gang Member sat and hid himself in an uncompleted building.

At about 10:30pm, when PHCN took the power, my neighbour decided to check and search around his house, that was how he saw the suspected Badoo Gang Member in an uncompleted building beside his apartment without wearing any cloth.

Immediately he saw my neighbour, he ran away.

Then my neighbour raised an alarm and call for help, people gathered and started chasing him, the badoo suspect jumped over nine fences but men in the neighborhood surrounded the area to search for him, fortunately he was caught and was handed over to the Police.

Meanwhile, yet another suspected Badoo member has been captured in the early hour of today, July 17, 2017, in Ijede area of Ikorodu, Lagos state by residents of the area.

The suspect was beaten and stripped before he was taken to the Police station.