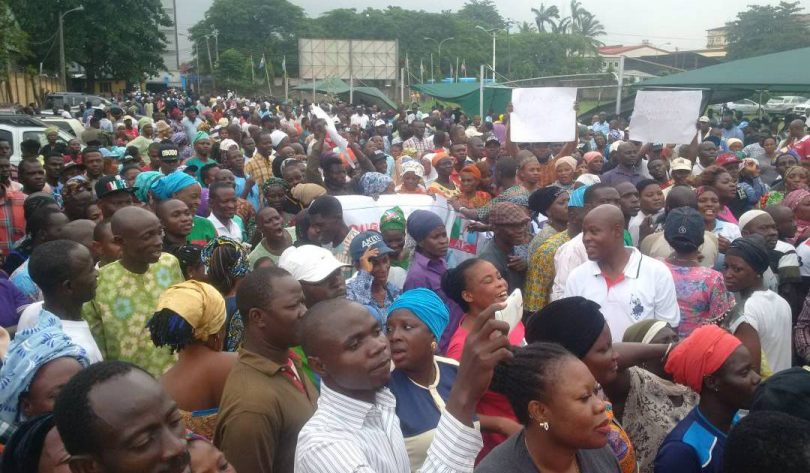 Following the uproar generated as a result of the ongoing tussle between the National legal adviser of the All Progressives Congress (APC), Dr. Muiz Banire and a party chieftain, Chief Dele Ajomale, over imposition of candidates, party loyalists are currently staging a protest against the former in Ogba, Lagos.

The protest march is been held at the Lagos APC party secretariat, Acme Road, Ogba.

The protest were pictured wielding placards and banners some of which says “EFCC Must Prosecute Banire Now!!!” and “Banire is the Greatest Benefactor of Imposition.”

The protest is coming few days after Dr. Banire raised an alarm that his life was been threatened over his principled stance against imposition of candidates by the party for the forthcoming Lagos council polls.

In a statement signed by Dr. Banire and obtained by InsideMainland, the legal luminary said “as the National Legal Adviser of APC, I am the custodian of the constitution of our great party and the counselor of the party on legal matters. It would be most destructive to find me lending my weight in favour of imposition of candidates on the matters of the party in order to promote a culture of personality cult advancement being nursed and nurtured by the likes of the organizers of the rally.”

He concluded saying “a life without worthy principle is not worth living.”

See some photos from the ongoing protest below.