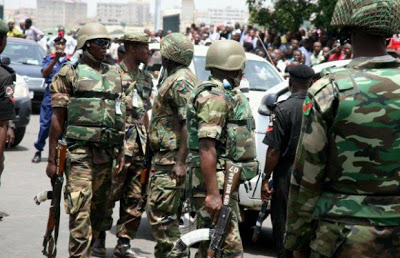 The Nigerian Army said it has rescued all the oil workers kidnapped by Boko Haram terrorists at Barno Yasu in Magumeri Local Government Area of Borno State.

According to the Army Spokesman Brigadier General Sani Usman, a team of Nigerian National Petroleum Company (NNPC) staff and their escorts returning from oil exploration were ambushed by the insurgents at about 3.00pm on Tuesday.

On receipt of the information, he said the Brigade mobilised and sent reinforcement, search and rescue party that worked and pursued the terrorists throughout the night.

Brigadier General Usman, however, noted that the Army was unable to rescue nine of its personnel and a civilian who were killed by the insurgents.

“So far, they have rescued all the NNPC staff and recovered the corpses of the officer, eight soldiers and a civilian have who have been evacuated to 7 Division Medical Services and Hospital”.

The team recovered a gun truck mounted with an Anti-Aircraft Gun, as well as two white Toyota Hilux vans taken away from the NNPC staff and one blue Hilux belonging to the CJTF.

The Army spokesman added that many of the terrorists were neutralised while troops are not relenting in the pursuit, search and rescue effort.