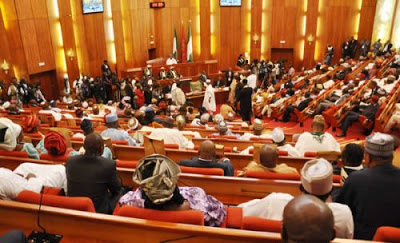 Eighteen Nigerian senators are under investigation by the Economic and Financial Crimes Commission (EFCC) for alleged N367.5billion fraud, it was learnt yesterday.

Seven are on trial. Some of the cases date back to 10 years.

A senator is being investigated for alleged stamp duty infractions.

One or two senators (outside the list) are under investigation for their alleged involvement in the N19billion and $86million London-Paris Club refund in which seven governors have been implicated.

A fact-sheet which indicates that 11 of the senators under investigation are from the North.

The others are from the South.

Those facing trial include two from Northcentral, three from Northwest, one from Northeast and one from Southeast.

Those being investigated cut across the six-geopolitical zones.

Most of the N367.5billion alleged fraud border on money laundering, misappropriation, unexecuted contracts, diversion of public funds to campaigns, and others.

In one of the cases, a senator is being probed for alleged diversion of about N108billion while he was a governor in one of the states in the South-South.

A senator allegedly embezzled about N47billion when he was a governor. Investigators believe he was aided by his wife and son.

A senator is standing trial for alleged mismanagement of N1.2billion ecological funds; another allegedly diverted to other uses N1billion meant for the repair of a collapsed dam.

Two aides of a senator, who is being probed for alleged illegal deduction of N3.5billion from the London-Paris Club refund have been quizzed.

Three new senators from the North-Central, South-East and South-West have been under investigation for some infractions, including alleged Stamp Duty collection fraud.

An EFCC source, who spoke in confidence, said: “The case files of all these 18 senators are already with us. Seven of them are already on trial.

“But, certainly, 11 others will be prosecuted at the appropriate time. It may interest you that some agencies in a few international jurisdictions are interested in some of the cases against some of these senators.

“It might also interest you that some of these cases predated the appointment of the present Acting Chairman of EFCC, Mr. Ibrahim Magu. But since continuity is a cardinal principle of the EFCC, Magu has decided to ensure that the matters in court are pursued to logical conclusion. There is also no waiver for all cases undergoing investigation.”

In response to a question, the source added: “Magu has no personal problem with any senator. He inherited most of these cases.”

Meanwhile, it was learnt that some of the senators have also made a “strong case for the discontinuation of either their investigation or prosecution by the EFCC as part of the conditions for supporting Magu.

In one of the lobbying sessions, a senator from the North-East said he committed no crime to have been subjected to trial by the EFCC.

Although a Senator from the North-Central was aggrieved, he was reported to have said; “I won’t block the nomination of Magu because he is probing me. I have forgiven him. But I know I did not commit any fraud and I will be vindicated in the end.”