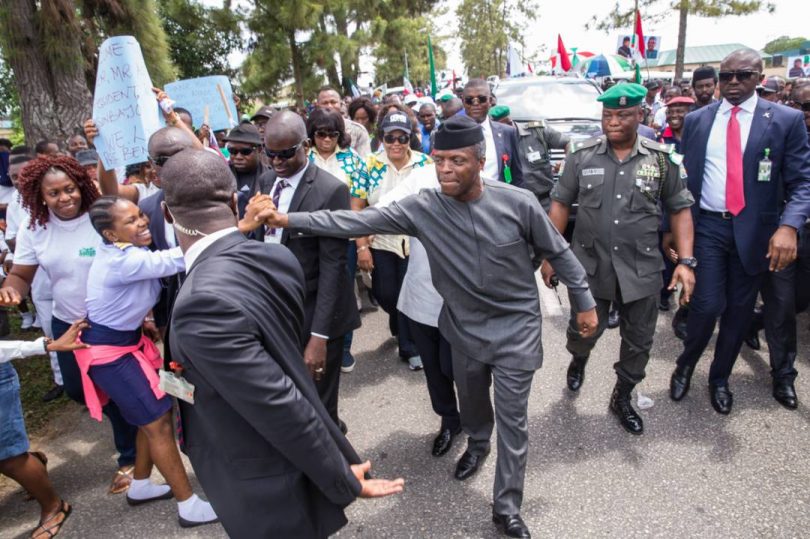 When, in the course of the 2015 general elections, the then APC Presidential candidate Muhammadu Buhari picked Professor Yemi Osinbajo as his running mate, a number of Nigerians did not really ascribe to the legal practitioner any form of political weight, many saw him merely as the complementary ‘spare tyre’ (a term used to describe the office of the Vice President or deputy governor, who is to be seen and not heard). And indeed going by recent history, Nigeria’s Vice Presidents have tended to be largely invisible. For that reason many expected Osinbajo to be just a lackey, an extra hand who wouldn’t contribute much, if anything, to the administration.

Having met and listened to Professor Osinbajo on at least two occasions — the first time at a lecture where he spoke intelligently for an hour and thirty minutes extemporaneously (and, was I indeed wowed!); the second occasion at a summit where he represented President Buhari, and where he gave a number of us reasons to believe in the Buhari administration — I knew he was going to disappoint all naysayers and doubting Thomases.

Then came January 2017, when our dear President needed to undertake a medical leave in London. Again the naysayers hurriedly assumed the false position that the presidency would collapse within a number of days under Osinbajo. The took delight in jeering, wondering what good could come from a man they had previously dismissed.

None of these people seemed to realize that President Buhari and Vice President Osinbajo are of a different breed. Neither of them is narrow-minded, power-hungry or driven by pecuniary gain. We have a President who has no problems handing over power to his deputy, and a Vice President who leaves no one in doubt as to his absolute loyalty to his boss. We also have a President who, over the years, has demonstrated that he is very comfortable working with and reposing confidence in visible and hardworking deputies.

For the 51 days that he functioned in January and February as Acting President, Osinbajo conducted himself with immense dignity, struck many with his unassuming humility as well as absolute loyalty to President Buhari. On each occasion he sought to earn praise for the president, positing that any positive from him was a plus for President Buhari. And when the President returned to Nigeria he acknowledged this, and publicly expressed his admiration.

It’s therefore unsettling for patriotic citizens like us to see faceless elements and mischief makers attempt to besmirch the name and works of the Acting President, and to seek to undermine the cordial and enviable relationship between him and President Buhari.

What they don’t seem to realize is that the Acting President has repeatedly made it clear that he acts based on the directions of the President. For those who paid attention to his May 29 Anniversary Speech, it would have been clear that everything the Acting President has done – from signing Executive Orders, to his tour of the Niger Delta, to the Ease of Doing Business agenda – has been at the behest of the President, and in fulfilment of the President’s vision for a changed Nigeria. That speech is publicly available, for those who missed it. You cannot read that speech and be in doubt of the fact that we have a single, unified Presidency, in which the President and his deputy are fully aligned in vision and implementation.

All of the rumours being peddled – that the Acting President is appointing only people of a certain religious or ethnic affiliation, or using taxpayers’ resources to attend his church in Lagos, or positioning for a 2019 presidential bid – all are lies and absolute balderdash. A close look at the Acting President’s aides would show that there are actually more Muslims than Christians, unless these mischief makers would want to convince us that the likes of Ade Ipaye, Bilkisu Saidu, Maryam Uwais or Gambo Manzo have converted to Christianity.

Also, the Presidency has since clarified that that the Acting President does not and will never use state resources to fund travel to his church in Lagos.  And regarding the allegations about 2019, the Acting President has by his actions in the last few months made it clear that he is not a man driven by political ambition. He did not angle or hustle to become Vice President, he was pursuing a successful private career when the offer came his way, unsolicited. And it is obvious that he has no interest in building political machinery for any purpose whatsoever.

All said, one can pin these malicious attacks on the enemies of President Buhari who do not want to see him succeed. The plot is simple: denting Osinbajo’s performance is akin to attacking President Buhari and undermining his administration and its successes and gains.

The ultimate plot is to disparage the Acting President in order to cause dissatisfaction within the presidency so that when the president returns, Nigerians would then watch the presidency reduced to another ‘Telemundo’ as it was with President Obasanjo and Vice President Atiku.

Heads or tails, these mischief makers won’t make much headway. Neither the President nor the Acting President will allow anything or anyone distract them from the task they signed up for two years ago: revamping and restoring Nigeria’s economy, securing the country from terrorists and bandits, and fighting corruption to a standstill.