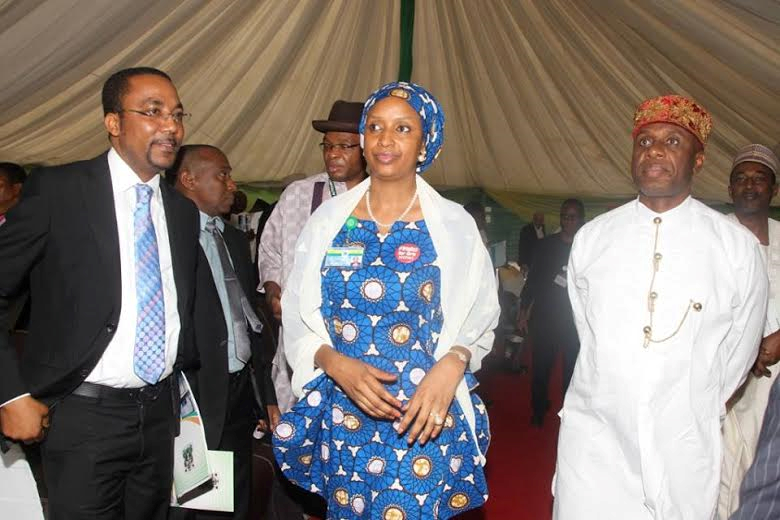 The first time I came across Hadiza Bala Usman’s name was on TV three years ago. When over 280 female students were kidnapped from their secondary school in (Chibok) Borno State in April 2014, she started the BringBackOurGirls (BBOG) campaign alongside Nigeria’s former minister of education, Oby Ezekwesili to force the Nigerian government to swing into action and ensure the prompt rescue of the abducted girls. The campaign got worldwide traction and she was thrown into the spotlight.

In July 2016, President Muhammadu Buhari appointed Hadiza Bala Usman as the first ever-female Managing Director (MD) of Nigeria’s port authority (NPA). Before this, she was the Chief of staff to Mallam Nasiru El – Rufai, governor of Kaduna state – the first woman to be so appointed so since the office was created in 1999.

El – Rufai, aware of her work and resilience, as she had previously worked with him on two junctures – at the Bureau of Public enterprise {BPE} and in 2011 as his special assistant on Project implementation when he was appointed minister of the federal capital territory {FCT}, handpicked her to help him restructure and generate reforms in Kaduna State.

Hadiza Bala’s appointment to head one of the most important agencies in the country came at the time Nigeria began facing massive decline in revenue from crude oil and the immediate need to spread the revenue supplies of the federal government. President Muhammadu Buhari acknowledged the need to make the NPA one of the proficient economic drivers of his administration and entrusted this staggering task to Hadiza Bala Usman.

As expected, many stakeholders reacted differently to Hadiza’s selection. There was general uncertainty among the civil service patrons on the ability of a 41-year-old woman to successfully pilot the affairs of the agency – the notion was that she did not have the necessary practical experience to run the ports authority.

Having hit the ground running by implementing a number of public sector reforms that are fundamental in transforming the NPA and minimising corruption in the system, Hadiza is now on the pathway of proving incorrect all the reservations that followed her appointment.

In less than 7 months after Hadiza resumed her role as the managing director of the NPA, an agreement was signed with the budget tracking and transparency organization. Making the NPA the first government agency generating revenue to open its books and accounts to the civil society and the public for scrutiny.

By making this move, she ensured that funds were not transferred to private accounts for the selfish interest of corrupt elements but were instead remitted into the federation account. Hadiza describes this particular agreement as an exit from the obscure practices of the previous administrations towards open governance.

That’s not all. In track with Hadiza Bala Usman’s directive to minimize corruption within the agency, investigations revealed a robust N11.2bn fraud where certain officials of the agency and some commercial banks were discovered to have conspired to hide monies collected as revenue in private accounts as opposed to forwarding into the port’s authority’s treasury account. 6 million euros of revenue from the NPA that should have been remitted into the federation account were uncovered in separate accounts at two commercial banks and another $23m of revenue was also found in another bank.

A resolute Hadiza, as a member of the presidential advisory committee on anti-corruption, has since positioned tactical measures in place to recover these unaccounted funds and has set up an anti-corruption office at the NPA. This office on the corruption index in the ports administration is in line with a report submitted by the Independent corrupt practices commission (ICPC).

Hadiza Bala Usman also put in place a debt recovery system within the NPA to recoup about $585m unpaid to the agency. This system allows for money that has been due to the agency over a period of 10 years to be recovered. For example, certain steps have been taken under the framework to retrieve the ports authority’s N400m caught in Aso Savings and another $19bn in Heritage bank. All these are anomalies being demolished by Hadiza Bala Usman and there are convincing indications that henceforth, NPA will not accept jammed funds in form of accumulated debt that should be otherwise invested in something advantageous for the agency.

To improve the ease of doing business in Nigerian ports in line with the up-to-date global practices, Hadiza pushed for the review of the port concession policy, which is about 10 years old. Many stakeholders have called for an evaluation of the policy, as some parts are not working in sync with its projected objectives. Among the numerous issues that stand to be resolved with the review, which Hadiza is now insistent on, is the midway foreword of a port economic regulator.

The policy review has also guaranteed a system close to a free market, through major policy review terminating the routine of monopoly and unfair benefit enjoyed by some terminal operators. Before the policy review, these terminal operators colluded with certain top NPA officials to create a cartel to have all gas and oil cargoes directed to their terminals alone under the exclusive concession agreement. However, with that monopoly wrecked, close to 165 port operators can contend favorably and on uniformed footing for cargoes to be discharged at their terminals.

As enhancing Nigeria’s foreign earnings through the NPA is part of Hadiza’s mandate, she erected fast track desks for easy export of solid minerals and agricultural products in the country’s seaports. This move alone will reduce to a reasonable level the time it takes for miners and farmers to export their products through the ports.

Furthermore, the Nigerian ports authority is now efficiently interfacing with other agencies to ensure improvement in their operations. It initiated a nationalized window project to domicile all operations, including those of the Nigerian customs service in a single platform.

Under the new managing director, NPA now circulates tariffs on their website for easy reach by the public. Pricing has now become open and competitive in line with the custom across the West African region.

Nigeria’s port authority with the recently applied reforms is on its way to becoming a fundamental economic driver for Nigeria at a time the country is anxious to expand its economy and create an efficiently run system.

While Hadiza Bala Usman still has a long way to go in reaching the anticipated level for the ports authority, she has shown that she is more than capable of holding the agency down through her commitment to obstruct all the revenue outflows and ensuring smooth operations.

Nana – Aisha Salaudeen is an economist/accountant with a knack for writing. When she’s not drinking coffee, her pen is spilling social commentary and non/fiction. She enjoys writing life into people and things and can be reached via salaudeenaishatu@gmail.com