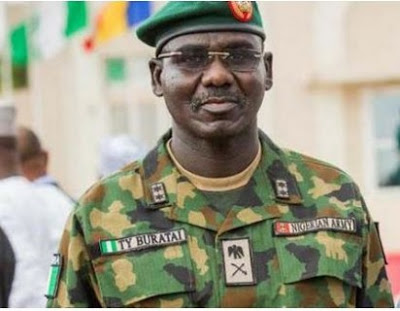 Aside the potential turmoil, death and destruction that an attempted coup could unleash, the experiences of other countries in the region should be enough to deter any would-be plotters from daring to even contemplate a coup in Nigeria.

His statement claimed that individuals had been approaching army officers for political reasons, and cautioned that: “Any officer or soldier of the Nigerian Army found to be hobnobbing with such elements or engaging in unprofessional conducts such as politicking, would have himself or herself to blame.”

The army has reportedly stepped up security measures and transferred several senior officers in the past week.

Talk of a coup plot is the latest conspiracy theory doing the rounds in Nigeria since President Muhammadu Buhari’s health took a turn for the worse earlier this year. Buhari spent nearly two months in London for medical treatment from mid-January to mid-March. On his return home, he said that he had never been “so sick” in his life and talked about undergoing “blood transfusion”.

This somewhat contradicted the suggestion that he was simply suffering from routine health issues, a narrative his aides have sometimes tried to push. However, Buhari’s specific illnesses, or exactly how serious they are, remain secret.

On May 7, Buhari returned to London for further treatment, triggering a fresh flurry of activities and round of rumours about both his health and what might happen if he cannot continue as president.

At the heart of many of the conspiracy theories is the issue of Nigeria’s zoning arrangement. According to this informal agreement, the presidency is supposed to alternate between an individual from the North and South every eight years.

This pattern was previously interrupted in 2010 when President Umaru Yar’Adua, a Northerner, died in office just three years into his term. He was replaced by his deputy Goodluck Jonathan, a Southerner.

Jonathan not only saw out the final year of Yar’Adua’s tenure but went on to win the 2011 elections and serve out another four-year term. This put the system known locally as “turn by turn” into disarray. It has meant that in 13 of the 18 years since the return to multi-party democracy in 1999, the president has come from the South.

When Buhari, a Northerner, stood against Jonathan in the 2015 elections and won, there was a sense that the North finally had its turn. But given Buhari’s poor health, there are growing fears that this turn may get cut short once again.

This possibility, which would see Southerner and Vice-President Yemi Osinbajo become president, is agitating certain groups. According to rumours, interested individuals have already come up with different scenarios to avoid the North losing power if Buhari cannot continue.

One sees both Buhari and Osinbajo being impeached. If this were to happen, the Senate president, Bukola Saraki, would assume office for three months and oversee the organisation of a fresh election. Another sees the president and vice-president jointly resign, triggering fresh elections. And another sees the two removed for illegally overspending during the 2015 elections; there are reports suggesting both the ruling All Progressives Congress (APC) and opposition Peoples Democratic Party (PDP) flouted the campaign ceiling.

A final scenario – if the army chief’s comments last week are indicative – is a coup d’état. This approach would circumvent the uncertainty of holding an election, but raise countless others.

These conspiracy theories and alleged plans are reflective of the current political mood in Nigeria, and mix together with other rumours and claims that are circulating.

One particularly insidious conspiracy theory centres on the fact that since Nigeria gained independence in 1960, all the Northern leaders that have risen to the highest position have either been killed in office or removed. Abubakar Tafa Balewa was killed in the 1966 military coup; Murtala Muhammed was assassinated in 1976; Shehu Shagari was overthrown in 1983 (albeit by Buhari, another Northerner); Sani Abacha was struck down by a heart attack while in office in 1998; and Yar’Adua died as president in 2010.

The wild suggestion is that this pattern is no coincidence and that Buhari is now being poisoned slowly. Another rumour adds to this the conjecture that APC strongman Bola Tinubu was aware of the president’s health ahead of the elections and that he engineered Buhari’s rise as part of a long game that would end up with a Yoruba in power.

What these dangerous rumours point to is the extent to which the political landscape has become polarised. The hateful comments pervading the country are creating animosity, distrust and suspicion.

When Buhari returned in March, there were huge outpourings of love and relief in the North and elsewhere. If the president – so beloved in certain parts of the country – doesn’t complete his term and there are suggestions of foul play or perceived attempts to seize power from the north, things could escalate and turn violent.

There are perhaps two possible best case scenarios for Nigeria at the moment depending on Buhari’s health.

If the president is fit enough, he could complete his term with Vice-President Osinbajo continuing to take on many of the actual responsibilities as it is the case currently. If Buhari is not able to finish his term, the VP could take over but make it clear that, unlike Jonathan, he will not to contest in the 2019 elections, allowing a Northerner to regain the presidency.

There are many less good possible outcomes, but the very worst case scenario would be a coup. Amongst other things, such a plan would be completely out of tune with present day realities of the continent in general but West Africa in particular. The regional bloc ECOWAS forbids unconstitutional changes of government, and the body as well as national citizens of various countries have acted to vigorously counteract such moves in recent years.

In Burkina Faso, General Gilbert Diendéré’s 2015 coup barely lasted a week before he was forced to return power to the transitional government. In Mali, Major Amadou Sanogo’s takeover in 2012 didn’t last much longer. And at the start of this year, The Gambia’s Yahya Jammeh was confronted by a wide host of steadfast regional neighbours when he tried to stay in office after losing the elections.

Aside the potential turmoil, death and destruction that an attempted coup could unleash, the experiences of other countries in the region should be enough to deter any would-be plotters from daring to even contemplate a coup in Nigeria.

Idayat Hassan is the director of the Centre for Democracy and Development, Abuja and tweets at @hassanidayat