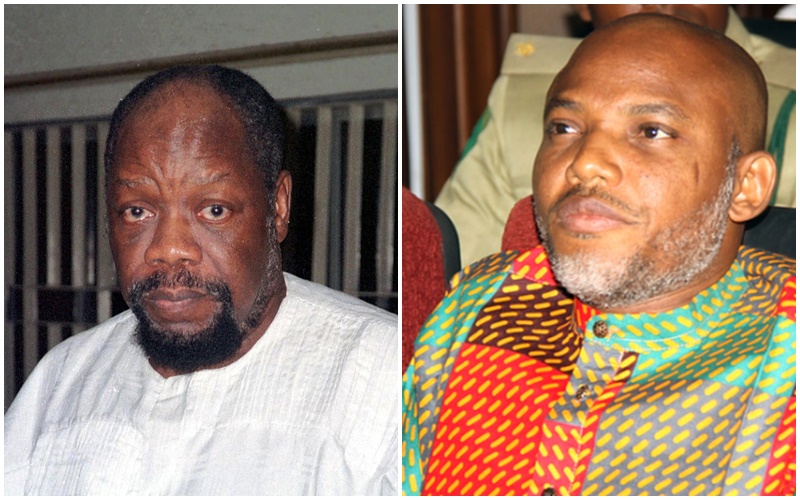 In war, the belligerent actors are safe and well fed, while the people starved. Like politics, the actors lite the fire while the followers get consumed.

Ojukwu used same strategy – while the East burnt, he had his family in Ivory Coast. At the end of the war, he was richer than when he started the war. By the time the war ended, he had transformed himself into an icon and leader of the Igbo thus squashing the egalitarian leadership posture of the Igbos. Until his death, he remained the traditional and political leader of the Igbos.

Then come  Ralph Nwazurike, the self acclaimed leader of MOSOP, like Ojukwu, he too ascended the Igbo leadership stool and reigned supreme, putting the lives of innocent young and old Igbo descendants in danger. After several years of needless confrontations with the security forces, he capitulated and fizzled into oblivion.

Seeing the cracks created by the vicious political campaigns between the APC and PDP, smart Nnamdi Kanu cripped in to fill the void, he rode on the people’s gullibility and begun the message of hate and like wild fire, everyone caught the frenzy and a renewed ideology was ‘rebirthed’. He sold the message of hate, falsehood and bitterness. He set his people against the state and in blind confrontations, he led them to challenge the forces and casualties became the reference. Deaths were recorded as young promising Nigerians breath their last. Tragically, in all of these, Kanu was not for once in the forefront of the occupations!

Quest for power and fame is the hallmark of desperation, and the seemingly frustrated actors often acquire power and fame through surreptitious strategy using tribe and religion as baits. Late Mohammed Yusuf used this stunts and overnight became self acclaimed leader of some muslim population in the North East. Nnamdi Kanu is benefitting from this scheme as we speak. Only a feeble mind would deny the fact that Kanu is the political leader of the Igbos today. He has amassed credible acceptance to himself, after Ojukwu, Kanu is the face of Igboland, he has even added spiritual feather to his occupation, instead of Christianity, he holds a strong Jewish beliefs and adoration in Igboland. He is the new rabbi of the Jews in Nigeria. Who say religion is not a tool for political power and recognition?.

The appeal however is that, the innocent people struggling for daily survival must not be used as pawn in the quest for political power, fame and recognition. The graves created by the senseless war of 1967 are still fresh and shallow. Never again, shall we take up arms against ourselves to the amusing dexterity of outsiders.