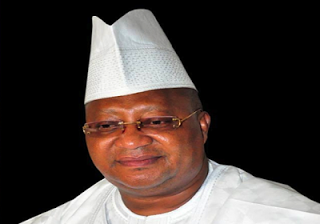 The late Isiaka Adetunji Adeleke’s family yesterday denounced the coroner’s inquest ordered by the Osun State government to determine the cause of his death.

It advised indigenes to discountenance “this kangaroo inquest into the death of our beloved Senator Isiaka Adetunji Adeleke.”

Speaking on behalf of the family, the deceased’s younger brother, Dr. Adedeji Adeleke, at a news briefing in Ede, described the inquest as self-serving.

Accompanied by the late politician’s son, Dele and siblings, Dupe Adeleke-Sani, and Demola, Dr. Adeleke said: “We condemn the continuous politicisation attempts by the state of this great loss to our family, particularly the ordering of this inquest at a time we are still coming to terms with the harsh reality of his sudden departure and the pain and grief therefrom.

“As part of our attempts to reach closure and begin our healing process, the family had ordered an autopsy to be carried out. This is the only scientific and globally acceptable means of objectively determining the cause of his death and we look forward to the reports. This is irrespective of the obvious infrastructural and technological limitations of medical laboratories.

“We have been informed by sources that the outcome of the ‘kangaroo inquest’ is predetermined by the state and designed to serve its own interest with distorted facts and misinformation, which will not be in the interest of the people of Osun State in general and the Adeleke family in particular.

“We have, therefore, as a family resolved not to participate or cooperate with the ‘kangaroo’ styled panel set up by the government, as it was clearly to serve the state’s political interests and ultimate establishment of its own self-serving ‘facts.’ While everyone, including any government, is entitled to his/her own opinion, the government inquest is an attempt to create its own ‘alternative facts.’ Facts are sacred and truth is constant. Alternative facts are nothing but falsehood.

“We are, therefore, compelled to reject the inquest with its predetermined outcome. We enjoin the peace-loving people of Osun State to discountenance this ‘kangaroo’ inquest into the death of our beloved Senator Isiaka Adetunji Adeleke.”

He challenged the government to explain to the people why it was in a hurry to order an inquest, when report of the autopsy ordered by the Adeleke family is yet to be delivered to the family.

“We wish to reiterate in strongest terms that the report of the autopsy ordered by the family must be released to no one else other than the Adeleke family. To do otherwise by the medical team conducting the autopsy will be tantamount to gross professional misconduct actionable with appropriate sanctions in law.

“We hope the concerned pathologists, who we regard and recognise as eminent and thoroughbred practitioners, will act according to their professional calling and oath by expeditiously concluding the autopsy and delivering the report to the Adeleke family, who are the only ones entitled to it.”