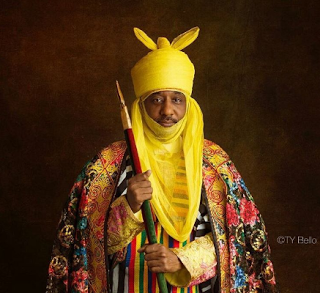 If Emir Sanusi is removed from his position on the basis of his reform activism, the signals would be very clear to the rest of Nigeria that the Muslim North is not ready to move along with other federating units on the path of progress and prosperity.

I had my first impression of royal etiquette in my native town of Okene, in Kogi State, North-Central Nigeria. Growing up within the precincts of my sprawling ancestral compound, I watched my grandfather, who was the sarkin makera of Ebiraland, carrying out his daily activities with poise and elegance, with the dignity of silence. He rarely spoke in public and when compelled, he spoke mostly in prayers. The people of Okene, alongside those of Bida and Ilorin, are some of the most assimilated into the Muslim Hausa-Fulani hegemony among the peoples of North-Central Nigeria. As you move up North, royalty increases in splendour and grandeur, with very high prestige attendant to it. So sacrosanct is the virtue of silence that traditional rulers appear in public dressed in full faced turban with the symbolic mouth covering. Their facial expressions betray no emotions and body language gives no indication of any biased sentiment. This is so because traditional rulers play critical stabilising roles in societies that are deep in traditional Islamic values, and which exist within a larger geographical space that is a modern, ethno-religiously diverse constitutional democracy, in order to contain any form of conflict between citizenship and faith.

It was unheard of for a traditional ruler to make open comments on politics and the economic policies of government, talk more of criticising public officials, because there are direct channels of communication, away from the public, between the political leadership and the traditional rulership institutions. Therefore, when the very exalted throne of the emir of Kano became vacant and Sanusi Lamido Sanusi, the dan majen Kano, who was buoyed by his surging popularity at the time due to his confrontation with former President Goodluck Jonathan, emerged a frontline candidate to succeed Ado Bayero, I had serious reservations about his suitability for a role in a deeply conservative establishment. Sanusi Lamido Sanusi eventually emerged as Emir Muhammadu Sanusi II, largely in defiance of the Jonathan-led federal government that displayed open opposition to his emergence, and through the vehicle of the Musa Rabiu Kwankwaso led opposition government of Kano State, which was riding high on the popular anti-Jonathan sentiments prevailing throughout northern Nigeria at that point.

Apparently, those who supported Sanusi Lamido Sanusi’s emergence as emir of Kano viewed his confrontation with the Goodluck Jonathan administration through the narrow prism of ethno-religious and partisan political sentiments. They probably thought of Sanusi Lamido’s activisms as CBN governor to be part of a larger script by Jonathan’s opponents to discredit the administration from within. However, Looking beyond Sanusi’s fallout with Jonathan, one could see a man not acting out a script with a predetermined political outcome but a restless spirit with the burning fire of an unbridled zeal for reform, as a classic case of an extreme non-conformist. Obviously, many people who supported Sanusi Lamido Sanusi’s emergence as emir did so on the principle of my ‘enemy’s enemy is my friend’. Unknown to them, Sanusi was not Jonathan’s enemy; it was Jonathan that was Sanusi’s enemy. Sanusi was just being true to his character as a typical non-conformist. Therefore, the current path chosen by Emir Muhammadu Sanusi II should have been expected of a non-conformist coming to head a conservative establishment.


The tragedy of the Muslim North’s underdevelopment is rooted in a unique form of Islamic religious belief and practices that foster a dependency mentality, combined with a total rejection of western education that has created millions of out of school children and out of work adults, commonly known as Al-majiri, who depend of handouts to survive.

However, realising the extent and depth of the problem confronting the conservative Muslim North within the Nigerian federation, my reservations about Sarkin Kano, Muhammadu Sanusi II, have given way to cautious optimism, as an insider is leading the call for societal reform from within and outside. With the level of backwardness and underdevelopment of the Muslim North, silence among the ruling class is no longer a virtue but a conspiracy against the progress and development of the land and peoples of the region. The stability hitherto ensured by the traditional ruling establishment has degenerated into a dangerous form of complacency that has reduced the Muslim North of Nigeria to the poorest and most underdeveloped part of one of the least developing countries of world, thereby guaranteeing the region the unenviable record as one of the poorest regions in the world.

The tragedy of the Muslim North’s underdevelopment is rooted in a unique form of Islamic religious belief and practices that foster a dependency mentality, combined with a total rejection of western education that has created millions of out of school children and out of work adults, commonly known as Al-majiri, who depend of handouts to survive. Furthermore, the suspicion of western education as a ploy to upset this backward social order forms the fundamental springboard for the radical doctrine of the violent rejection of western education and modern values including the diversity of a multi-religious constitutional democracy that is Nigeria. This doctrine enjoys widespread legitimacy among the people of the Muslim North and hence the emergence of the deadly terror group, Boko Haram, which is trying to actualise the aspiration of an ideal but elusive Islamic state through violent insurgency, because the establishment that fostered this beliefs and practices are unable to achieve the same goal politically within the legal framework of a constitutional democratic Nigeria.

Expectedly, Emir Sanusi has gone from being applauded for his stinging criticisms of the past administration of Goodluck Jonathan’s economic policies to condemnation for criticising the northern ethno-religious establishment and their political collaborators on matters of underdevelopment of the Muslim North. He is now being accused of not practicing what he preaches as revealed by the probe into his flamboyant lifestyle on the dole of the emirate council. Some have accused him of putting his own people down by his uncharitable remarks about the state of affairs in the Muslim North.

To good students of history, this is a repeat of the events of 1963 that led to the dethroning and banishment of Emir Muhammadu Sanusi over allegations of financial impropriety in his management of the Kano Native Authority treasury. However, for excellent students of history, this is a repeat of the 19th century events leading to the overthrow of the Habe rulers of the original Hausa city states of Gobir, Kano, Zaria, Katsina, Biram (Hadejia) and Rano, leaving out Daura as the only surviving Hausa ruling dynasty, by Fulani Muslim warriors acting under the inspiration of the scholar-warrior and mystic, Sheikh Uthman Ibn Fodio. By the beginning of the Jihad in 1804, the once prosperous Hausa city states of Western Sudan were in decline much like the succeeding Fulani emirates of modern northern Nigeria have been. At the core of the decline were issues of social injustice, oppression and lack of willingness to educate the populace, particularly women, because an educated people cannot be oppressed.


Many of those criticising the emir don’t realise the cold fact that the North has no choice but to reform rapidly… For how long will the rest of the nation continue to bear the burden of the disastrous consequences of our wrong choices of a flawed and archaic religious belief and practice that have arrested the development of northern Nigeria?

The Habe rulers obscured the ideals of pure Islam with incorporated traditional practices, that made the religion a useful instrument of oppression, rather than liberation and freedom. Uthman Dan Fodio, like one of his current successors, Emir Sanusi, spoke out loudly against the establishment and admonished the rulers of Hausa land then to follow the path of positive reforms. Both men were labelled anarchists and accused of seeking to upset the social order. Uthman Dan Fodio and those who heeded his call were persecuted by the state and many went with the Sheikh on forced exile to Gudu in present day Niger Republic. Unlike the emir, the sheikh was an outsider to the establishment and could only actualise his reform agenda through armed confrontation with a very violently hostile traditional leadership structure that was impervious to change. Today, there is an opportunity for a peaceful orderly reform of an establishment that is perhaps more decadent than the overthrown Habe ruling dynasties. Like the Sheikh, the emir is simply calling on the establishment to voluntary reform in order to realise the full socio-economic potentials that northern Nigeria is naturally blessed with.

Many of those criticising the emir don’t realise the cold fact that the North has no choice but to reform rapidly. Unlike the ancient Hausa city states that were independent and shared no pain or gain with each other, Muslim northern Nigeria is today structured along the lines of a federation of diverse ethno-religious and geo-political units. For how long will the rest of the nation continue to bear the burden of the disastrous consequences of our wrong choices of a flawed and archaic religious belief and practice that have arrested the development of northern Nigeria?

After over six decades of independence, the Muslim North is perpetually categorised as educationally disadvantage and the establishment, rather than take deliberate steps to correct this anomaly, appears to revel in it alongside its short-term political advantages. Today, the rest of the federation is paying for the reconstruction of the North-East that was destroyed through the self-immolation arising from a dangerous religious doctrine that fostered a violent conflict between faith and citizenship. If Emir Sanusi is removed from his position on the basis of his reform activism, the signals would be very clear to the rest of Nigeria that the Muslim North is not ready to move along with other federating units on the path of progress and prosperity. Inevitably, the rest of Nigeria will reassess their current engagements with the Muslim North and most certainly seek a change to the existing rules of engagement.

Majeed Dahiru, a public affairs analyst, writes from Abuja and can be reached through dahirumajeed@gmail.com.