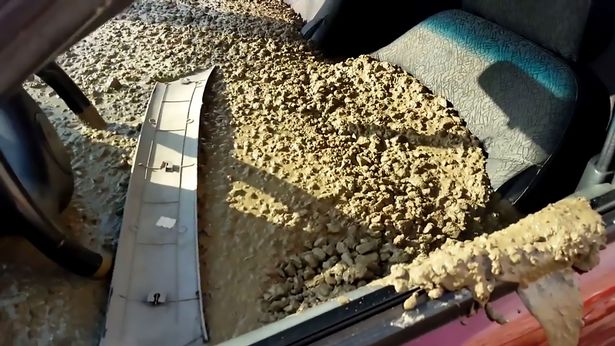 An angry husband filled his wife’s car with concrete after she reportedly changed her surname to win a supermarket promotion.

The man claimed he and his wife had been going through a rough patch in their marriage and that her name change was the final straw for him.

An eyewitness with a smartphone caught the bizarre incident on camera in Russia’s second city of St Petersburg.

The man, whose name has not been revealed, is seen directing a concrete mixing lorry as it backs up next to the car and then positions the chute through the car’s open driver’s window.

The final straw in their relationship was when she changed her last name, from his surname to the name of a supermarket , ironically called Veniy (Loyal).

The supermarket chain had promised to pay 50,000 RUB (£703 GBP) per month to any customers prepared to legally change their surname to that of their brand.

She had recently reportedly admitted to her husband that she had not been loyal to him, prompting the husband into wanting his revenge.

He came up with the idea of filling her car with concrete because he knew how much she loved the car, keeping it spotless inside and out.

The footage is proving popular with viewers after being uploaded to social media and video sharing websites.

One viewer, ‘Aleksei Fokin’, said: “I wish I could see his wife’s face”, while ‘Edu pryamo’ commented: “I hope this idiot gets a fine.”

And ‘Vladimir Nemchenko’ noted: “The lorry driver could be prosecuted, just like this guy, as technically he was the one who poured the concrete. Why would he agree to do that?!”