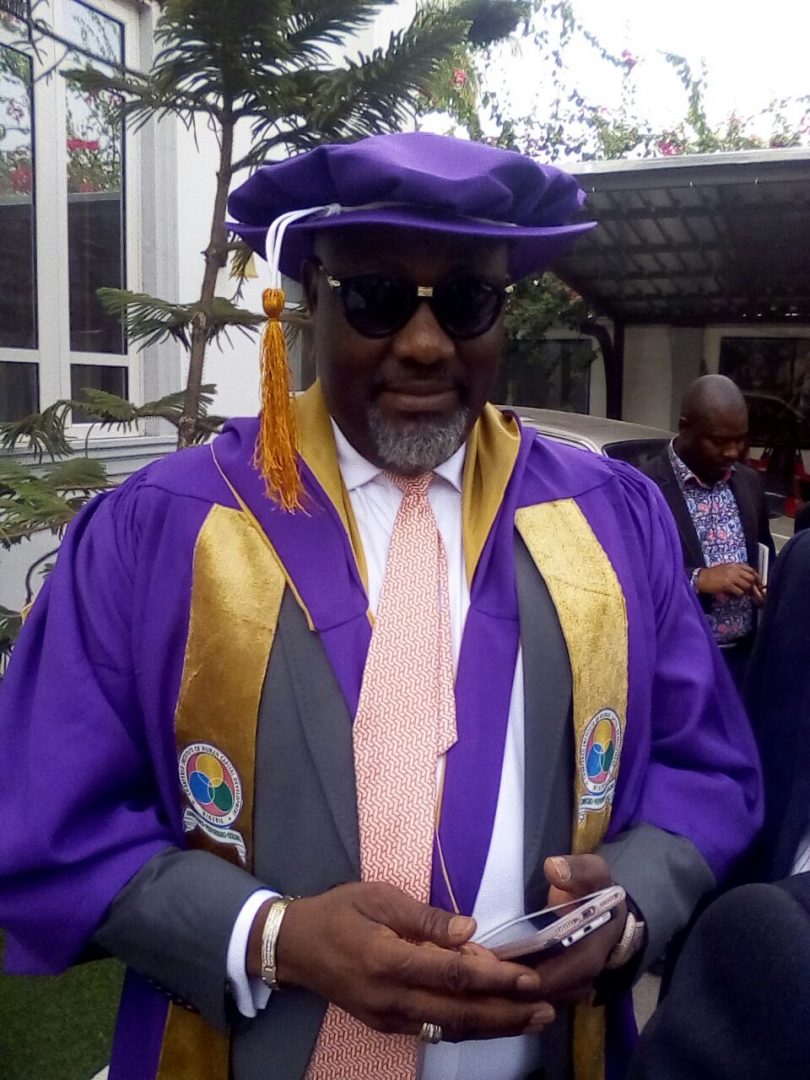 Psychologists talk about a condition known as narcissism. I understand it could have varying degrees of effect on people but pathological narcissists are said to be in love with an idealised self-image, which they project in order to avoid feeling and being perceived for their real, sometimes internally wounded self.

Narcissists are usually identified as haughty, self-centered, manipulative, and demanding. They also generally dwell on grandiose fantasies about their own successes, beauty or intelligence in addition to living with an obsessive sense of entitlement.

Experts say that in sustaining the attempt to pull one over people, narcissists are willing and able to tell lies and exaggerate to no end. All in a bid to gain the respect of people and remain on that high horse which they have set for themselves.

So, it is not out of place for such people to claim to have attained degrees that they have not attempted, journeys they never embarked on and possessions they never owned. And when they have indeed attained these milestones, they flaunt their accomplishments without consideration for the feelings of others!

Thoughts about this have nagged since allegations began making the rounds about Senator Dino Melaye’s certificates. While I had indications that the senator indeed graduated from the Ahmadu Bello University pretty early into the controversy, I found Melaye’s boast about being on his seventh degree consistent with tendencies to seek unnecessary attention and feel superior to others. Then, consider the unsolicited display of flashy automobiles and houses and Tuesday’s infantile adornment of an academic gown to the National Assembly!

But I then wonder whether Melaye is different from a lot of other Nigerians in any substantial detail. Here is a country where a vast number of the people are drunk on the pursuit of self and selfish interests. Good enough, psychology attests to the fact that there is a measure of the narcissistic in virtually every human being. In other words, as our world gets increasingly individualistic and goal driven, levels of narcissism, ranging from mild to severe are becoming more widespread.  It is doubtful that any Nigerian would want to dispute this, given that we see so much vainglory and covetousness around; it is sickening!

In the less than two decades of return to democracy, four instances of false certificate claims have reverberated nationally. The first scandal was blown open by The News magazine in 1999. It involved a young man with the name Salisu Buhari, who had just been elected speaker of the house of representatives. The News reported that Buhari did not attend the University of Toronto as he had claimed and that he falsified his age. After a series of denials and the magazine’s insistence on its scoop, Buhari admitted that he indeed forged documents and perjured himself.

Not long after, Tell magazine went to town with the alleged fraudulent educational claims by the then Lagos state governor, Asiwaju Bola Ahmed Tinubu. In some sense, the claims against Tinubu were a tad more grievous than Buhari’s. He was alleged to have lied about information regarding his primary, secondary and tertiary education.

There was also the accusation that a former minister of aviation, Stella Oduah, might have lied about her qualifications. According to the report, officials of St. Paul’s College Lawrenceville, Virginia, United States, where Oduah claimed to have gained a master’s in Business Administration, told an online news platform that no such programme ever existed in the institution. The report further insinuated that the woman might not even have obtained her first degree from the institution.

After we “ooed” and “aaed” for a couple of weeks, these allegations died natural deaths with each of those alleged to have infracted moving on with their lives. In fact, the only one of these allegations that the nation had the tenacity to resolve was the case of self-confessed Buhari, who later got a “go and sin no more” presidential pardon, and an appointment on the governing council of the University of Nigeria, Nsukka to boot.

Tinubu has gone on to be one of the heroes of Nigeria’s democratic growth and the seeming poster boy for what is the most progressive of our politics.  Of course, queries about the school certificate of President Muhammadu Buhari have met their untimely death given the inability of the people to agree on the morality behind giving Nigerians closure by proving the availability or otherwise of the certificate. But that is just by the way. Only God knows the number of our compatriots in and out of high office who walk the corridors of power and corporate offices armed with bogus educational achievements.

Why the theory of the possible prevalence of the narcissistic personality disorder is appealing, especially amongst seekers of public office in Nigeria is the fact that no one, including the President, needs more than a secondary school certificate, which they do not even need to pass to attain to any office. This is according to section 131 (d) of the 1999 constitution (as amended). So why do people lie about higher certificates which they did not acquire when the same is not a prerequisite?

This says a lot about our values as a people. In this same world in which three of the most influential people in the last century voluntarily dropped out of universities, Nigerians are cooking up stories about degrees that they neither attempted nor got.

For most of the past decade, the founder of Microsoft and one of the most benevolent givers to Nigeria, Bill Gates, has remained on top of the list of the wealthiest people in the world. Strikingly, Gates voluntarily dropped out of Harvard University.

Steve Jobs,  late founder of Apple, was quoted by his biographer, Walter Isaacson, as saying in an address at Stanford that: “I had no idea what I wanted to do with my life and no idea how college was going to help me figure it out. And here I was spending all of the money my parents had saved their entire life. So I decided to drop out and trust that it would all work out okay.” Even in death, he remains one of the most talked-about personalities from the United States of America.

And then the much younger Mark Zuckerberg dropped out of Harvard to devote his time to his startup social networking site, facebook.com, in 2005. Ten years later, the company was worth $12.5bn with 1.5 billion active users monthly. Yet, Nigerians are falling over each other to acquire certificates which literarily have no meaning to their lives.

A corollary to the diminished value of our paper qualification is the premium that we suddenly began to place on the class of degrees that people earn. Companies, even those without any iota of academic objective, started to insist on employing candidates with first class or a minimum of second class upper degrees.

To beat them at their game, some dumb blonde, whose only aptitude is a pretty face, would succumb to the devices of a randy lecturer, settle herself and curiously come up at the top of her class. Not to be left in the cold, the young man who is not so endowed would bring out some money (usually nothing enough to prosper anyone), and buy any class of degree that he wants ready for sucker companies that value certificate over the quality of the personality that they intend to employ. No wonder so many companies end up employing incompetent impostors who cannot help themselves when confronted with the reality of the task at hand.

This is the tragedy of a nation without class. A nation which stifles the ability of its people to attain their best potential would most definitely breed manipulators, some of who will falsify things just to survive or for an ego trip, a desire to lord it over others. We are a people who build houses that we don’t need, drive cars way out of league and send our children to schools we cannot afford, all just to “belong” or make some people envious.

The only thing that is worse than our vain disposition is our enthusiastic dishonesty, the inability to own up to our malady and redress.  The way it is in Nigeria now, we are all holier than the Pope until we are caught in the same malfeasance for which we condemn others. Reminds me of something a musician once said to the effect that: “we all steal, but it is the thief that is caught red-handed that we join the mob to lynch” But until Nigerians sit down as a people and reassess our values, those wrong-headed values that drive the leader and the led in Nigeria will continue to clog our progress.