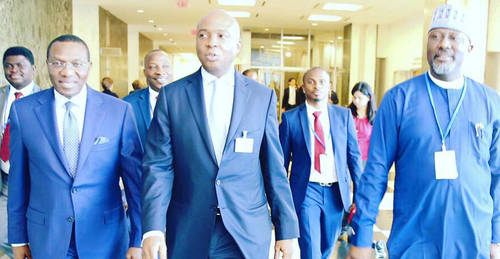 Senator Bukola Saraki, I greet you sir, I salute you. How is the senate fairing under your leadership? I was very happy when you became the senate President on the 9th of June 2015 no doubt. I argued with my cousin and some friends for almost a quarter of the day why I think you are the best man for the position of the number three man in Nigeria.

I do hope you don’t mind the truth because i’m going to say some very hard truth here. Can you imagine a fluffy whiff of cloud hanging between heaven and earth? That’s how our life is right now. We are just hung there without movement. Just because of one man and that is you.

The senate belongs to you just as Kwara state belong to your family. No one challenges you because you are simply unquestionable, unbeatable, untouchable and unstoppable.

Each time you are in the news sir it’s always for the wrong reasons and why is that? Talk of the one who was alleged to have mortgaged the future of Kwara state, Panama Papers & the swindlers, the one who decry public criticism and still got 330 million exotic car, the one whose case is with CCB for false declaration of assets. Haba na only you waka come?

I have often quoted that “Our fear of hypocrisy is forcing us to live in a world where gluttons are fine as long as they champion gluttony “That’s why your little lap dog ; my 3rd class senator and your wife’s bodyguard will always do your bidding.

We are in recession and our lives are spiraling out of control yet our NASS is malfunctioning, making mess of our lives. All that bothers you is wardrobe allowance, exotic cars, Magu’s removal, Hameed Ali’s uniform but no single legislation to help get our economy out of comatose. You and your fellow Senators seat most of the time for no discernible reasons, perhaps to appropriate sitting allowances.

You want to summon everyone to the senate but no one can summon you. Each time someone try as much as ask you questions as regard your stewardship in the past you raise a false alarm then use the paraphernalia of your office to subjugate the fellow. Meaning it’s no longer democracy when offenders are made to pay for their sins. Can’t you see now that the idea of democracy has been stripped of it moral imperatives and come to conote hollowness?

Some of you senators are just making the transpose from here to there like Johnny Walker but doing nothing. Our common patrimony have become bargaining chips and human shield. That was why you gave senator Kabir Garba Marafa a notable critic of yours, a juicy committee chairmanship just to buy his support and shut him up and it worked. Congratulations!  Your insatiable quest for power made you and your cronies suspend Senator Ndume and it’s making you want to ask the President of the Federal Republic of Nigeria to come grovel before you. When does ambition go overboard Mr Senate President?

The National Assembly that we all respect so much has become the house of jesters. Perhaps you don’t understand that the cost of maintaining you jesters has dug deep holes in our national treasury. You can imagine the percentage of our budget that goes into your upkeep. You all literally live at our expense only going through motions like somnambulist.

No one can put a hand to why we deserve the kind of treatment meted out to us by you and your fellow greedy law makers. You do these things just because you know that the cumbersome recall process which has never happened before is holding us bound.

Senator, when does ambition go overboard? Remember that everything that has a beginning must surely have an end. Meaning a time will come when your highness will be dethroned. You will look back and you won’t find those urging you on now. That includes my 3rd class graduate senator.

Go to @aminugamawa on Twitter and see the result of the poll that “Between the @officialEFCC under Magu and @NGRSenate under Saraki which one do you trust more?” and see how Nigerians feel about your leadership of the Senate.

Sir, you may want to arrest me, invite me for questioning on the floor of the senate or refer me to Ethics and privileges committee. I am not hard to find just tell me the kind of uniform to wear to appear before you.