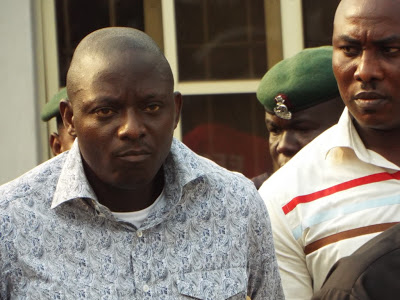 Patrick Akpobolokemi, former director-general of the Nigerian Maritime Administration and Safety Agency (NIMASA), recently threatened to slap a female journalist in the premises of the federal high court, Lagos.

The Economic and Financial Crimes Commission (EFCC) accused him of defrauding the federal government to the tune of N795.2million.

In a video, which is now circulating on social media, Akpobolokemi is seen in the presence of one of his lawyers, and some unidentified individuals.

One of the men around him apparently drew his attention to the reporter who was trying to take some photographs.

“Which one be this one na?’ asked the man putting on a blue shirt with stripes.

“This is the premises of the court,” the reporter responded.

At that moment, Akpobolokemi moved closer to the journalist, using his right hand to block the camera.

“Who are you now? Why should you just come here?” he asked.

“I am a member of the press. I can take pictures within the premises of the court.”

Losing his cool, Akpobolokemi threatened: “I will just slap u now; I will slap you,” to which she responded: ” No you cannot, sir. You cannot slap me. What’s that?”

It is not clear when the incident happened.

This is not the first time that Akpobolokemi would be involved in an altercation within the premises of the court.

He was in the news in December 2015 for resisting arrest.

Akpobolokemi, who had just been released from prison custody on Friday after fulfilling a bail condition of N50 million, was walking towards his car when officials of the anti-graft agency approached him.

“I am not going anywhere,” he screamed on top of his voice, as he struggled with them.

With the support of armed mobile policemen, the operatives overpowered Akpobolokemi and bundled into a white Toyota Hiace bus.

Below is the video of the latest incident.

Posted by Nigerianeye on Thursday, February 2, 2017