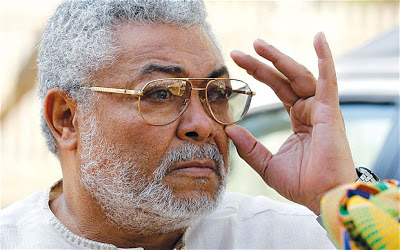 He described the emergence of President Buhari as a divine intervention because of his anti-corruption credentials.

Rawlings made this known weekend during a courtesy call on him by a group of actors including legendary actor, Pete Edochie.

He said, “It is unfortunate that the cost of living in Nigeria appears to be suffocating the people.

Recall that Buhari had been on a 10-day vacation in the UK .

The Presidency had announced that Buhari wrote to the senate to extend his vacation indefinitely due to ‘health issues’, an action that has drawn so much condemnation from Nigerians.

“Rather than blame Buhari, we should be blaming the extent and depth to which corruption had gripped Nigeria.

“But I guess you need a creative team that would know how to resolve the economic situation of the country without possibly undermining the cost of living of the people.

“People are getting away with massive corruption because they are not compelled to conform to traditional religious authority.

“We swear by the Bible and the Koran and lie but dare not with our local traditional deities.

“We are destroying the fabric of our society. This is not good enough. People are distorting historical truths all the time.

“When you find yourselves at the centre of human endeavours like I have, truth must be sacrosanct,” Rawlings added.