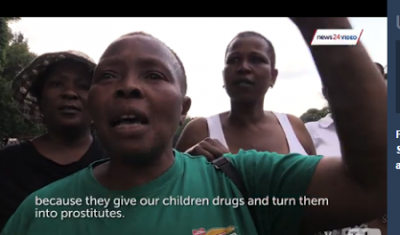 Residents of Rosettenvile, South of Johannesburg, South Africa have expressed displeasure over the acts of immigrants living in the country. Last few days, at least 15 houses belonging or rented by immigrants, especially Nigerians, have been burnt by the angry residents.

They are furious that Nigerians give their children drugs and turn them into prostitutes. They say they didn’t want to burn the houses but wanted them to live their country.

The houses were razed after the police started shooting at the protesting residents. The community got angry and started burning the houses.

They ask: How can a 9-year old child be a prostitute?They say when the children go to school, they are scared because they don’t know if the child would come back. They explained they don’t have enough money to hire buses to bring the child to the front of their gates.

They reported the case, but their was no action, that is why they resorted to what they did.