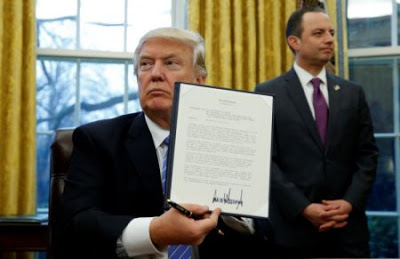 Four US states are suing the Trump administration over the president’s executive order banning refugees and travellers from a list of predominantly Muslim countries from entering America.

New York, Massachusetts and Virginia joined Washington state on a growing list of states in launching legal challenges against executive order that wreaked havoc at airports at the weekend

Washington became the first state to sue the White House on Monday.

On Tuesday New York joined a federal lawsuit against Trump’s executive order brought by the American Civil Liberties Union Foundation, the Urban Justice Center and others…

“Virginia has a substantial interest in protecting its public universities and their faculty and students from the academic and fiscal disruption posed by the executive order,” according to the state’s motion filed in the federal court of Alexandria

Massachusetts attorney general Maura Healey said the state was also filing its own case seeking to have the ban struck down.

The executive order is harmful, discriminatory and unconstitutional. It

discriminates on the basis of religion and national origin, Healey said at a press briefing at her office