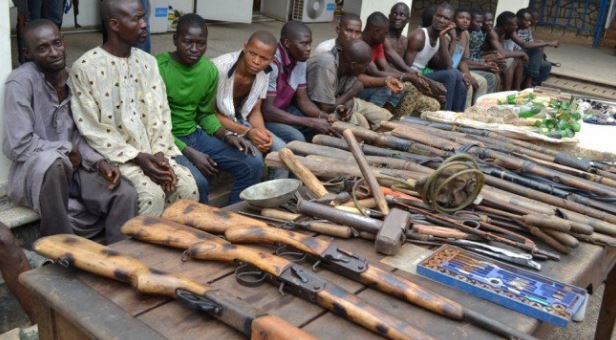 Unchallenged by elders in the community and without fear of law enforcement agents, they conduct their menacing activities in the open and residents are well-aware of their sophistication with dangerous objects. ?Sikiru Akinola writes about the deadly activities of young boys who are not up to 100 but are popularly called “one million boys”.

Kudeti, one of the most popular communities in Ibadan, Oyo state, houses the Cathedral Church of Saint David. Many successful Nigerians have lived in that community. The house of Adelabu Adegoke ‘Penkelemesi’, the late populist politician, is a stone’s throw from Adebipon Street, where ‘One Million Boys’, a notorious group, has recently turned to a ‘cathedral of violence’. Anytime they strike, the innocent residents and those who are unlucky to be at the right place at the wrong time always count their losses.

Their base, which is opposite the Cathedral?, was always lively until tragedy struck, forcing many residents to leave their homes and abandon their shops for fear of being injured or killed.? The place is now like a graveyard.

On December 19, nobody had premonition that something bad was going to happen. At about 8 pm, while Muslims were almost ending the Ishai prayer, sounds of gunshots filled the air. Many could not wait till the end of their prayer.

A witness said the attackers arrived in a Micra car, one tricycle and more than five motorcycles. Some women later returned to pick their children. Innocent people were beaten and injured, shops and property were razed. While the operation lasted, the place became a no-go-area.

A hairdresser, who had returned to get some things from her shop, got a bullet on her shoulder. She died before help came her way. A fragile old man, who could not escape, also sustained injuries and died the next day.

One Sikiru Muftau, leader of a rival gang, was unlucky as the lower part of one of his hands was chopped off. Muftau died before the severed part could be located.

?While families of those who lost their lives are still mourning, those who shops were razed have started appealing to government to help them.

Ayodele Opeyemi, who could not hold back tears, explained that she lost everything she laboured for, to the incident.

“From where I was hiding, something was thrown into my shop. They shot at the thing and it ignited fire,” she said.

“?One of them ordered them to set all other shops ablaze. Every shop close to the place was razed. It was after a part of where we hid caught fire that we decided to find another escape route.”

?She displayed the remnants of the burnt N90,000 that she kept in the shop before the incident.

?Ayinla Adededji, a barber who was in his shop when the incident happened, revealed that petrol-soaked bread was thrown into his shop. He said he was unsure whether the police were aware initially when ?the groups clashed three weeks earlier.

“In preparation for the festive season, I used my savings and loans to renovate my salon: tiled the floor, bought two new generators and four new clippers but everything is gone,” he lamented.

“I am grateful to God that I escaped their bullets, which were shot sporadically.”

How the fight started

Another resident said the fight broke out after a rival gang, led by one Indomie, 29,refused to lead his boys to join the group. However, another person gave a different account.

“There was a guy from the ‘Indomie’ camp who was caught with a stolen phone,” he said.

“Though A-bila was not around, his boys ‘disciplined’ the guy. The guy later went to inform ‘Indomie’ about the punishment meted out to him. Indomie’ led his boys to a reprisal, but he suffered severe injuries and was in the hospital for more than two weeks.

?”When they first clashed, the elders settled it for them. Both of them, ‘A-bila and Indomie were invited at the ‘State’ ( short word for the State headquarters of the Oyo State National Union of Road Transport Workers, Olomi) and they resolved it. They are not members of the NURTW but they just decided to invite them so that peace will reign in the community. ?We never knew they were going to clash again until that evening.”

Adekunle Ajisebutu, spokesman of Oyo police command, said nine suspects had been arrested in connection with the incidents.

Breakdown of the groups

?Before 2014, Abiola?, who leads the gang, was relatively unknown. It was learnt that the Soka issue — the ritual killer’s den of kidnappers that was discovered in Ibadan — brought him to limelight. ‘A-bila’, as he is fondly called, led others to search for his missing motorcyclist friend. And he immediately became the leader with the ‘victory’ recorded.

“There was a time a rival gang came to fight them. While others ran away, ‘A-bila?’, who was almost the youngest of the gang, led his boys and they overpowered the ‘enemies’. Since then, he has been accorded the right to lead and speak on behalf of the group,” a resident who knew Abiola from childhood said, asking not to be named.

“He should be around 28. His father is late but he has a mother, though I don’t know where she lives.? He was not that violent when he was in secondary school; he attended St. Lukes. Grammar School, Molete.

“It was after he returned from Lagos that his popularity as a thug began to soar. He is the darling of many politicians. In fact, the ‘Golf 3? car he uses was bought for him by a politician. He has contacts. His wife just packed in.”

?Most of the boys in his camp, it was learnt, are those who had nowhere to go after the demise of late garrison commander of Oyo politics, Lamidi Adedibu, whose Molete residence is a distance of less than 10 minutes to the area. ?They are all between the ages of 18 and 30, most of them in secondary schools, terrorising their teachers and colleagues.

The source continued: “Anytime they go to ‘war’, they come back with guns and other dangerous objects seized from rival gangs. And their arsenal increases, thereby threatening a peaceful future. Every day, they buy new clothes, okadas and are boyfriends to many beautiful girls, hence they see it as a gainful enterprise. Younger ones living in the community see their behaviour as one to be emulated.

?”The group formed by Abiola is populated by like minds he brought them together from one junction to the other. ‘One-million boys’ has more than one sub-group — from Beere, Born Photo, Mapo, Idi-Aro and Isale-Asaka, Kudeti, Idi-Arere, Eleta, Odinjo, Modina etc. They are more than these and that is why they are referred to as ‘one-million boys’. I cannot give the precise number of its member but they are up to 100. A-bila is the leader.

“‘Indomie’ does not belong to Abe-igi. Abe-igi Aanu, has been in existence for long. ‘Indomie’ is not the leader in the place because they don’t have caucus. What they do at the ‘base’ is to drink alcohol and smoke marijuana. But since fight broke out, he has been made leader of the base.”

?An end in sight?

The State government, through Toye Arulogun, its commissioner for information, culture and tourism, has condemned the incident, threatening to use the full apparatus of government to deal with any individual who engages in any act that is inimical to the peace of the state.