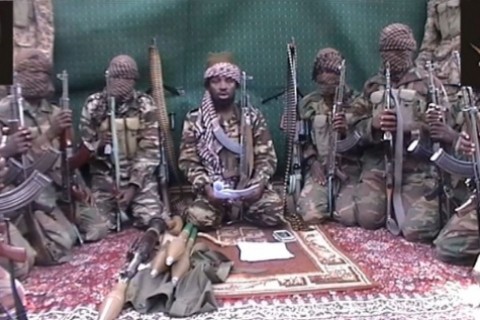 There were indications yesterday that leader of the Boko Haram insurgents, Abubakar Shekau, may have been captured in Borno State.
Unconfirmed reports said Shekau was nabbed by the ‘king of hunters’ around Gafa Mountain in Borno State.
Efforts to get official confirmation from the military failed, but a key said on phone that speculation about Shakau’s capture had been on for over a week. He however, revealed that troops of the Nigerian Army fighting in the area had surround the Gafa Mountain area last week over intelligence report that top Boko Haram leaders were hiding there.
The source said that with the cordon thrown around the area, there was no way Shekau and others would leave the place alive or without being captured.
Severally, the Nigerian military had pronounced Shekau either arrested or killed and severally the Boko Haram leader had bounced back alive, with YouTube video releases.
The Nigerian military had in September 2014 said that it had subdued Boko Haram leader, but shortly after that statement he appeared in a new video denouncing moves by the Nigerian Army to eliminate him.
On May 12, 2014, the DSS, through its former spokesperson, Marilyn Ogar, insisted that the man in the videos released by the sect was not the real Shekau.
She had stated:  “Boko Haram has become a franchise; anybody can assume and lay claim to any name. What I know is that the original Abubakar Shekau is dead; the person claiming to be the national leader now is not the original Abubakar Shekau.”
Earlier this year, the Nigerian Army had announced the death of three key commanders of the extremist Boko Haram sect. The army said the terrorists were killed in a major air strike on their location in the dreaded Sambisa Forest.
The spokesperson for the Army, Sani Usman, said Shekau was also inflicted with “fatal injury” during the operation.
According to him, the bombardment was carried out on Friday while Shekau, who the Nigerian military had pronounced dead several times in the past years, was leading his group in performing the Friday prayers at a secret location called Tayye, in the heart of the vast forest.