A Syrian man witnessed his own funeral after pulling himself out from a mountain of rubble where he had survived for 36 hours.

It was believed that Mohammed Rayhan was among 117 people who had died when government forces shelled the market place in Douma, just over six miles north east of Damascus. His family had given up all hope when he failed to return home and started mourning Mr Rayhan’s death. 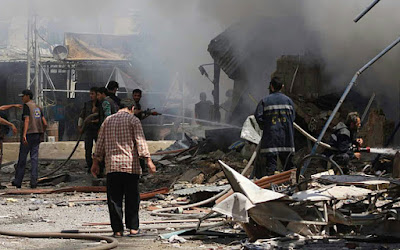 However after three days beneath the rubble he was extricated by rescuers. With the dust still embedded in his beard and long hair, he returned home. In doing so he interrupted the final day of mourning, much to the delight of his family.

Mr Rayhan is s now being called the “Living Martyr” after his miraculous survival.