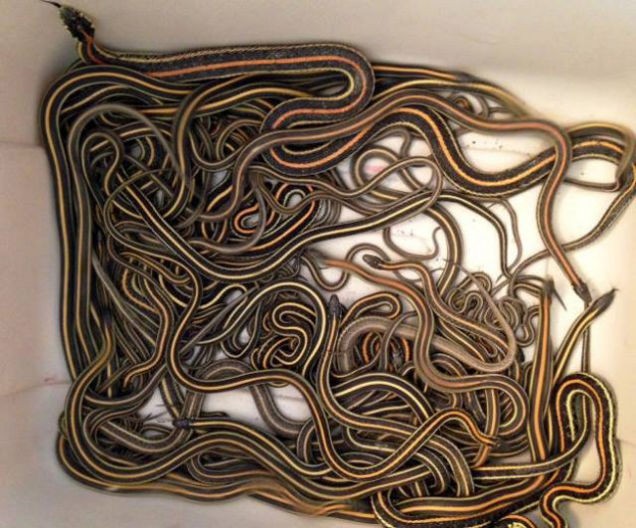 One hundred and two snakes were found in a home in Canada and they filled up five pillowcases. Apparently, these were “just” garter snakes, and it was in a rural area of Canada, and the snakes were just preparing to hibernate for the winter.

Recently a family in Canada, discovered a few small snakes in their basement and called the local wildlife rehab agency.

Megan Lawrence, the agency director, said, “The family contacted us when they found a few garter snakes in their basement. … They were finding more and more and … they were finding them in their kitchen and their bedrooms, and they decided it wasn’t a good idea to have them there anymore.”

So Lawrence and her partner used about five pillowcases to collect the serpents, and then moved the snakes into a bucket to count them. They then separated the snakes by size. She said the longest snake was nearly one meter, or a little over 3 feet, and the shortest was approximately 22 centimeters, or about 8 inches.

A snake expert at the local museum, Ray Poulin, says nothing about this story is too unusual for folks in Regina.