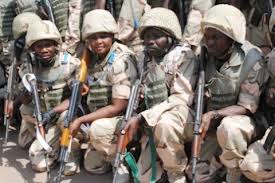 Eighteen  soldiers, including a  lieutenant,  on Monday appeared  before  a General  Court Martial in Jos,  Plateau State for aiding members of the  fundamentalist Islamic sect, Boko Haram,  and other insurgent groups in their  activities.

The  JTF and STF were deployed in  the two states following the menace of  insurgent groups in the country. While the JTF is also  battling with Boko Haram members  in Adamawa,  and Yobe states,  the STF has been grasping with Fulani herdsmen who,  in the past 10 years had taken Plateau State by the jugular.

The soldiers are being tried under charges termed, “communication with the enemies, cowardly behaviour,  murder and manslaughter.”

The  General  Officer Commanding the 3 Division of the Nigerian Army, Maj.-Gen. Ebisowei Awala,  said before  the inauguration of the five-member panel that  the soldiers were duly investigated by the military police.

Awala described   the  court martial  as  one of the instruments conferred on him by the  Armed Forces Act chapter A 20 Laws of the Federation of Nigeria to address problems in the army.

He explained  that any officer who wanted to succeed in the military should be disciplined and loyal, adding that these were two “essential requirements” an officer should not lack.

The GOC said,   “Discipline is the foundation on which the military career rests; as a matter of fact, discipline and loyalty are two essential requirements no officer or soldier, who wants to succeed in professional soldiering, can afford to lack.

“It is the duty of superiors to observe, correct and instantly deal with negligence or any misconduct on the part of subordinates.

“When there is any breach, it is expected that appropriate disciplinary measures must be taken by commanders to forestall future occurrences.

“This way, the Nigerian Army can continue to play its constitutional role and sustain its accolade as the pride of the Nigerian nation.”

Awala said that the  court martial was  necessary so as to ensure that the high level of professionalism required to confront the lingering security challenges  in the country, especially in the North-East  was sustained.

He enjoined the parties in the court martial to discharge their duties expeditiously and with a high degree of commitment, to enable the accused persons to get justice.

According to him, justice is a three-way traffic that involves the accused, the   army and the state; hence the need for fairness and equity.

“I want to implore this general court martial to ensure that no effort is spared to achieve this three-way traffic of the justice system; in this case, of the accused, the Nigerian Army and the state.

“Where a person is convicted of an offence, sentence ought to be passed. Such sentences must be humanely meted out.

“Punishment is among the means available for the maintenance of discipline in the Nigerian  Army; as such the kind and amount of punishment should be adequate enough to achieve its purpose and serve as a deterrent to others.’’

He  stressed that the GCM was convened  to sustain a high level of professionalism required to confront the mounting security  challenges in the Division’s  area of responsibility.

Judge Advocate, Col.  Dorothy Wilson-Ekwo, told  newsmen  after the convening of the GCM  that the suspects  would be given a fair hearing.

When the charges were read to the soldiers,  they pleaded not guilty. No lawyer appeared for them.

Thereafter the court rose without announcing any adjourning date.

However one of the lawyers present, Mr. A. B. James, told journalists  that he was only there as an observer.

Another court martial is  also trying 14 officers and men under the 3 Armoured Division for various acts of misdemeanour.

A former  Commander of the 33 Artillery Brigade in Bauchi, Brig.-Gen. Muraina Raji, was  tried by a Special Court Martial at the 3 Armoured Division, Jos for his alleged role in the escape of two high-profile Boko Haram suspects.

Though he was  discharged and acquitted of all the three charges, he was convicted on “special findings” by the court and sentenced to a three-month loss of seniority in his rank.