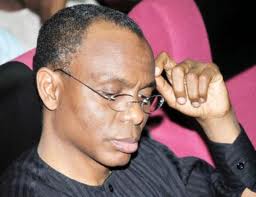 Mallam Nasir el Rufai’s lawyers today concluded the cross-examination of Michael Okoye, a former PHCN engineer. The case is being heard by an Abuja High Court, and the charges are based on the revocation and allocation in Abuja during Mallam El Rufai’s tenure as FCT minister.

Okoye, is the third witness called by the prosecution. Kanu Agabi, counsel to the third accused, opened by asking Okoye whether Plot 1201, Asokoro was meant for a substation, Okoye said it was, and that it was to be built by PHCN. Agabi then asked him to read aloud the remarks on Exhibit 4 which made clear the station was to be built by the FCDA. Okoye said PHCN was allocated about 44 plots in the FCT but he is not aware of the process of allocation; he also said Exhibit 4 is not an evidence of title. Okoye said PHCN’s title derives from the master-plan. But the signatory of Exhibit 4, Alhassan (PW1), who was then the Executive Secretary of the FCDA, had told the court that plots are not allocated in the master-plan, to which Okoye responded that he was not there when PW1 testified and that he has never seen the master-plan. Exhibits 4 and 5a were signed by the same person. In Exhibit 5a, the maker of Exhibit 4 said that PHCN had confirmed it no longer needed the corridor, and therefore advised that the plots that were earlier revoked there be reinstated.

Okoye (PW3) said he was not aware that allocations from Plot 1201 to persons specified in the charge was made before Exhibit 4 was issued. Okoye was asked for an document evidencing PHCN’s title, and he said there are letters of allocation but no survey plans to the best of his knowledge. He confirmed that the law requires that land titles be registered.

Akin Olujimi, counsel to the first and second accused, asked Okoye about the size of Plot 1201. Okoye said it was initially 2.5 hectares but it was reduced by encroachment to 1.6 hectares, adding that it is the transmission sub-sector of PHCN that handles technical drawings for agency’s projects. He further testified that no corridor was required on Plot 1201 because of the 132kva line across the road.

Cased adjourned to 21 March 2013 for continuation of hearing. The case against El Rufai was initiated by the Yar’Adua government. It was dismissed for lack of jurisdiction by the Federal High Court, but was refiled by the Jonathan administration at the FCT High Court.