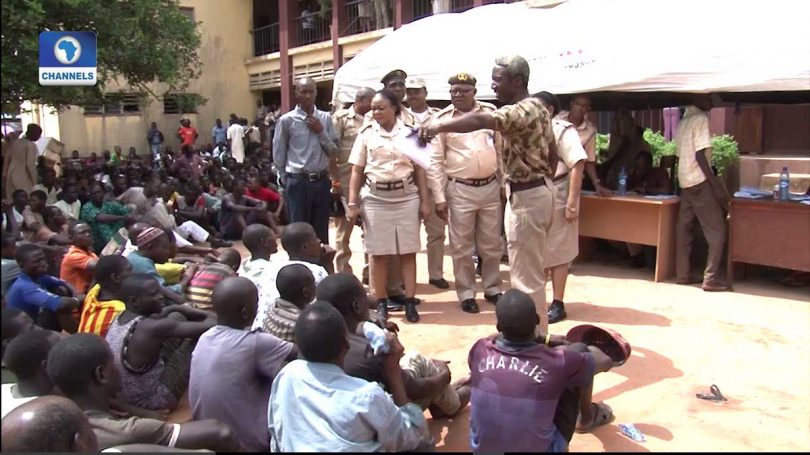 The Nigeria Immigration Service on Tuesday said it arrested and repatriated no fewer than 450 illegal immigrants from Edo in the first quarter of the year.

Comptroller of Immigration in the state, Mr. David Adi, disclosed this at the presentation of a refurbished Hilux van by the Management of Okomu Oil Palm Company Plc to the command, in Benin.

Adi said that those repatriated were mainly from the Niger Republic, Mali and Ghana, adding that they were “irregular immigrants’’ and security risks to the country.

He said that the affected foreigners had no regular travel documents and credible means of livelihood.

Adi commended Okomu Oil Palm Company for the vehicle, saying that the gesture would help the command in achieving its statutory duties.

He said that the success of the raid on illegal aliens’ domain was attributable to logistics support by some companies, including Okomu Oil Palm Company, in the state.

“The company had sunk a borehole at our outpost station at Iguobazuwa in Ovia South West Local Government Area of Edo.

“The command additionally requested for the company’s assistance in refurbishing the van and the managing director agreed.

“We appreciate the long-standing relationship between the company and the command.

“I will definitely pass on this gesture to the Comptroller-General of Immigration Service and I hope other stakeholders will emulate this good gesture, ’’ he said.

Earlier, the Managing Director, Okomu Oil Palm Company Plc, Dr Graham Heifer, had said that the gesture was the company’s way of fulfilling part of its corporate social responsibility to NIS to enhance its operational efficiency.

“Immigration service has always assisted us in the area of educating our expatriates to ensure that they do the right thing with regard to immigration laws,’’ Heifer said.

According to him, we have 15 expatriates from countries such as South Africa, Kenya, and America in our company.

“We ensured they came into the country following approved protocol.

“It is our obligation as part of our corporate social responsibility, to assist Immigration Service to enhance its operational efficiency.

“Our company hopes that this refurbished van will improve the service’s operational efficiency,’’ he said.