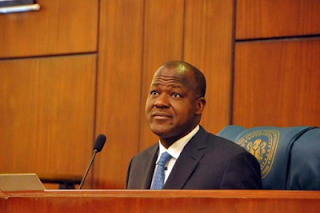 Dogara Queries Non-disclosure Of Interests Accrued On Nigeria’s Foreign Reserves Accounts By CBN
The Speaker of the House of Representatives, Hon Yakubu Dogara, has queried the non-disclosure of the interest accrued on Nigeria’s foreign reserves accounts, saying inspite of spirited efforts by the parliament to know its state, it remains shrouded in secrecy.

Speaking when a delegation from the Fiscal Responsibility Commission (FRC), led by its acting chairman, Mr Victor Muruako, paid him a courtesy visit in his office, the Speaker said agencies like the FRC should be in custody of such figures for dissemination to the public when necessary.

The House had on 15th December, 2015, passed a resolution calling on the Central Bank of Nigeria to declare interests accruable to the foreign reserves accounts of the federation.

“We earn interest on foreign reserves, like Botswana. Because they don’t have oil, it is the second highest revenue after resources earned from natural resources. You will see it as a budget item: interest earned from foreign reserves. In Nigeria, we have been asking the question, “are we earning or are we just running charity with it or just leave people to manage it? Are we capitalising the inerest? What is the interest? Nobody has ever told us.,”

So which one is the government agency that you can run to and easily obtain this information? CBN, of course, is the one managing it. It is the custodian of the foreign reserves we have but the point is that if they are not forthcoming with regards to what has been happening with the interest earned on foreign reserves, there should be an agency of government that we can run to.”

He also sought to know why the ceiling on borrowing as stated in the FRC Act is not adhered to, saying, “do we continue borrowing, borrowing, borrowing until we have borrowed billions? The Fiscal Responsibility Act speaks to those things so why is it that it is not being done?”

The Speaker noted that there is the urgent need for the government to properly fund the commission in order to deliver on its mandate and strengthen its powers which he said has the capacity to reduce corruption by over 80 percent.

Faulting the present approach adopted by the government to check corruption, which acts through the EFCC to punish corruption offenders after the crime has been committed, he noted that efforts should be directed to checking the root of the problem.

“The entire motive for, or the reason for the establishment of this agency was for us to have an agency that will ensure thst we have efficient allocation of resources in our country. Once resources in a country are not efficiently allocated, or in an efficient manner, there is bound to be dislocation in the economy of that country.

“If we hope to get the best from agencies such as yours, it means that we have to resolve across board to put some resources at the disposal of the agency otherwise, if we think that we cannot fund the agency but the agency will live up to expectations, I think we are only deceiving ourselves.

“Even from the way we are fighting corruption, it is like emphasis is built on EFCC; what EFCC does, it stops there. But the problem with that approach that you are dealing with symptoms of corruption and corruption is like a tree. Once you continue to deal with the leaves and the fruits, and the root is still there, you cannot totally eliminate corruption. You end up jailing people, waiting for people to commit offence and it is like applying the medicine after the event.

These are preventive agencies and we ought to invest more in agencies such as the Fiscal Responsibility Agency because we have to make it difficult for the coeruption itself to take place and once we do that, we will be applying the remedy at the root of corruption; not at the leaves or the fruits or whatever we are seeing in the open. Before it even takes place, it has breen tackled and prevented.”

“So there is no limit to the kind of attention we can pay to agencies like these because this is the right way to combat corruption itself to ensure that resources are efficiently allocated and that we have fiscal discipline. Once we have done that, we would have reduced incidents of corruption by perhaps, over 80 percent.”

Earlier, the chairman of the Fiscal Responsibility Commission (FRC) urged the Speaker to facilitate the speedy amendment of its establishment Act to, among other things, empower the commission to retain a percentage of the operationing surplus it collects from ministries, departments and agencies of government on behalf of the federal government in order to boost its activities and grant it financial independence.