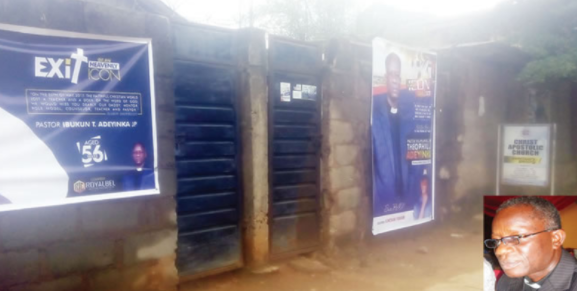 There is palpable fear in Iju-Ishaga end of Lagos after a group of unknown miscreants suspected to be assassins reportedly invaded the Christ Apostolic Church, Sanctuary of Blessing, stabbing the head of the Ministry, Pastor Ibukun Adeyinka to death.

Adeyinka, 56, was rushed to a private hospital and was referred to the Lagos State University Teaching Hospital, Ikeja, where he was pronounced dead, Punch reports.

After committing the dastardly act, the four-man gang reportedly escaped through the church fence, leaving the properties untouched.

The bereaved wife of the cleric, Mrs. Olasunbo Adeyinka, told Punch the hoodlums struck around 3:00 am on Tuesday, May 30, 2017, adding that they did not say anything throughout the period of the attack.

She told Punch: “We were asleep when they entered the church. They came to our house and we didn’t know anything was happening until we heard a sound like something was falling. There was a power outage, so we couldn’t see clearly. My husband was the first to wake up. They broke into the house through the front door.

“They didn’t say anything to us even as we asked what they wanted from us. I just heard my husband shouting, ‘In Jesus name’. I also re-echoed it, saying ‘Amen, in Jesus name.’ I never knew they had stabbed him in the chest.

“They left by scaling the church’s fence. I saw that my husband had become weak. That was when I knew that they had stabbed him. There was a lot of blood in the room.

“They didn’t take anything. Up till now, I can’t say who they are and why they did what they did. He had a lot of ministerial assignments in June, which will now be on hold. It is painful.”