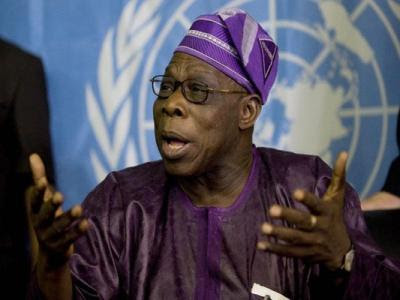 OBJ as he is fondly called said he would like to be the main distributor of music.

This may not be unconnected to his campaign for the patronage of indigenous and home made products.

In a video chat with popular producer, Alex Ozone while on an Ethiopian plane from Addis Ababa to Lagos, Obasanjo said he would like to be part the industry that has now taken Africa by the storm.

The former President further said he was committed to #Team Street industry after Producer Alex Ozone introduced some artistes to him onboard Ethiopia air from Adis Ababa.

Obasanjo in the video shared via Facebook, said: “Well, you have shown me the artist, manager and producer.

He was also seen with Nigerian artist, Skales who disclosed on his Instagram page @youngskales that Obasanjo has been initiated into the industry.