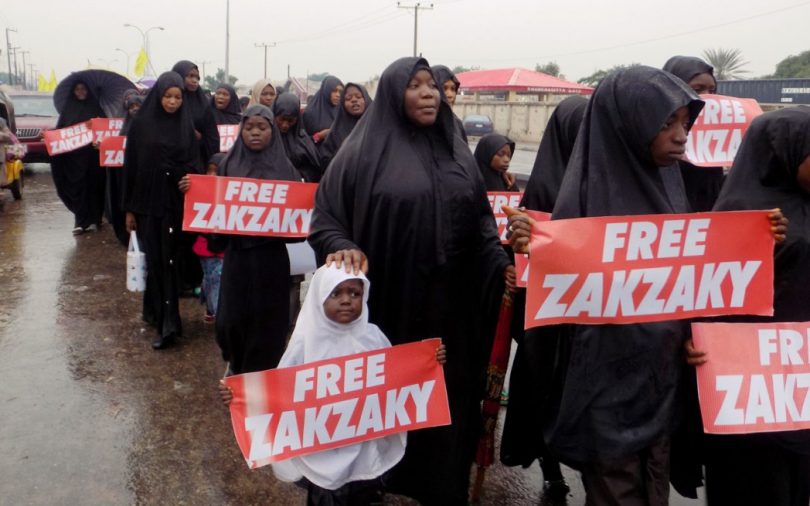 Shiites under the aegis of Islamic Movement of Nigeria, IMN has on Friday protested over the continuous detention of it leader, Ibrahim Zakzaky, saying that the confinement of it leader by the government after being granted a bail by court, is illegal.

The protesters, who stormed the city chanting “government, free our leader, free Zakzaki, we are not terrorists, we are Nigerians, we demand justice,” also blocked major roads in Kaduna metropolis, thereby causing traffic gridlock.

A press statement titled “a prisoner of conscience at 66,” signed by Shiek Abdulhamid Bello, one of the Islamic Movement of Nigeria’s leader, to celebrate the birthday of Zakzaki reads: “The inhuman treatment meted out to our leader Shiekh Zakzaki is exceptionally horrific. Not only was he multiply shot, fatally wounded and detained without adequate medical attention, he is being held against the rulings of a competent court in the land.

“As the sheikh clocks 66 blessed years today, we yet again troop out to show our vehement displeasure at the continued incarceration of our leader. We are out to lament at the way the Nigerian government is mishandling one of its most prominent elder.”

Aliyu Umar, who spoke on behalf of the protesters, said attempts have been made severally, demanding for the unconditional release of their detained leader, Zakzaki as his health condition is getting worse and depleting daily, but all effort was to no avail.

“One of his eyes is blind due to torture, and it’s up to a year that they killed his children and demolished his belongings. Despite court orders to release our leader, and pay a fine of 50 million Naira for damages done, the federal government insisted not respect the rule of law,” he said

As the situation is getting out of hand, Umar however called for the world’s assistance in ensuring that court’s order is respected and their leader held in captive is been released.

“Since they are pushing us to the wall, we promise to keep on protesting until justice is served,” he added.