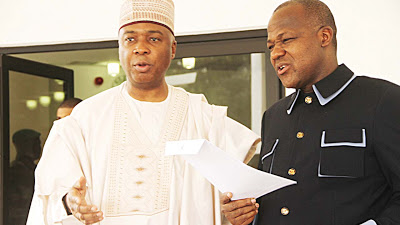 Lest we miss a vital opportunity to reflect on the anti-corruption campaign, we must put the positions of Senate President Bukola Saraki and House of Representatives Speaker Yakubu Dogara on the inveterate plague in the proper perspective. It serves no good to the anti-corruption campaign and the nation’s development in the long run for their views to be dismissed in a huff simply because of a phalanx of allegations that have portrayed the duo and other members of the National Assembly as not immune from corruption.

Saraki is facing prosecution at the Code of Conduct Tribunal (CCT) for corruption. The citizens are riled by other senators’ apparent complicity in the alleged sleaze of their leader because they have waited in vain for the lawmakers to evince a sense of moral repulsion against identifying with him whenever he goes to the tribunal or court over his case. Underpinning the outrage is that if they were not as corrupt as their leader why should they even allow him to preside over the affairs of the upper legislative chamber? Why not replace him and avoid him like a plague as long as the trial lasts? Also, Dogara has been accused of budget padding, a brand of corruption that reportedly entails the manipulation of a fiscal plan to the detriment of the wellbeing of the bulk of the citizens. But unlike the case of Saraki, the allegation of corruption against Dogara seems to be escaping from public consciousness.

Dogara and his colleagues have been able to squelch and banish the ex-chairman of the House of Representatives Appropriation Committee, Abdulmumin Jibrin, who made the allegation against him into political wilderness where he now flails, flounders and screams, striving to draw the citizens’ attention to the corruption in the lower legislative chamber. But nobody seems to hear him.

Thus, in this atmosphere of corruption in the National Assembly, the government and the citizens feel affronted that Saraki, Dogara and others could dare give suggestions as regards how to fight corruption. They do not hesitate to tell them to go and clear themselves of the allegations of corruption before talking about how to deal with the menace.

Yet we must listen to Saraki and Dogara like other citizens as they make their input if the campaign against corruption must be successfully prosecuted. In the first place, as long as Saraki and Dogara remain the leaders of the second arm of our national government, we are required to listen to them whether we like it or not. Sadly, we miss a very important point when we say we do not expect Saraki to speak about corruption. We must come to terms with the paradox that not many Nigerians are as qualified to speak about how to fight corruption as Saraki. Saraki has been accused of corruption. At first, most people thought that the end of his political career had come. But they waited – for months and now years. Saraki’s public career was not truncated; he remains the Senate president and the executive that seemed to initially hound him now rather placates him. Is this man not qualified to tell us the loopholes in the anti-corruption laws of the country he has exploited to escape a life behind bars? Or is Dogara not qualified to speak about corruption after he has been able to convince the citizens and the government that is supposed to prosecute him that contrary to the allegations of Jibrin, what the lawmakers have done was to exercise their oversight right by adjusting the budget to suit developmental needs?

Instead of quickly dismissing them, we should listen to them. We cannot easily dismiss Saraki’s position at the public presentation of Senator Dino Melaye’s book on corruption that in the fight against the national malady, prevention is better than cure. He asked us not to be more interested in punishment than deterrence. To him, this caution is important because it is ‘‘difficult to establish guilt beyond all reasonable doubts as required by our laws.” Saraki further drew the ire of some people when he observed that because the anti-corruption officials cannot secure conviction because of the absence of the painstaking investigation and prosecution that are required, they just engage in showmanship to please their political employers.

Again, for Saraki, even the high-profile corruption cases of politicians and other public officers are not as serious as systemic corruption. He warned that the systemic corruption which is expressed through junior-and middle-level government workers demanding gratification before doing the official job for which they are paid salaries is as grievous as what is often considered as high-level corruption for which political leaders and other public officers are subjected to sensational trial.

Thus, for Saraki, what the country needs are measures that would make it difficult for corruption to take place. Saraki listed some of these measures as strengthening accountability, limiting discretion in public spending, promoting openness and making it difficult for stolen money to find a safe haven. At the core of Saraki’s model of fighting corruption is that it must be institutionalised and not targeted at individuals in a manner that renders its purpose suspect. Dogara aligned with Saraki’s position when he argued that what is needed is not the celebration of the prosecution of high-profile corruption cases but the building of an environment that would be hostile to corruption as it is only strong institutions that can check the menace.

So, rather than hastily dismissing Saraki and Dogara, we must acknowledge that the anti-corruption campaign has not been successful and thus the need to make it work. But beyond the mere articulation of what is wrong with the anti-corruption campaign which some people equate with the pooh-poohing of the whole exercise, Saraki and Dogara have so much role to play if it must be retooled and stripped of external and self-inflicted impediments to success .

This would involve working to give the country a new constitution in the place of the existing one which was fraudulently packaged to foster corruption and oppression. In this regard, Chinweizu is right when he dubs the 1999 constitution as the godfather of corruption. Indeed, to successfully fight corruption, the nation needs a new constitution that abhors a licence for official stealing under the rubric of immunity, and that guarantees an equitable federal structure that does not reward indolence and lack of creativity and punish industry.