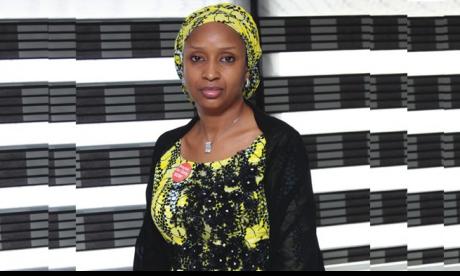 Hadiza Bala Usman made history in the annals of the Nigerian Ports Authority (NPA), when, on July 12, 2016, President Muhammadu Buhari appointed her the first female managing director of the agency. As expected, many maritime stakeholders reacted in different ways to this appointment.  While many doubted the ability of a woman to successfully steer the ship of the agency, others saw her as a green horn who does not possess the requisite technical background to run the agency.

But having hit the ground running by initiating a number of reforms which are repositioning the NPA to satisfactorily play her statutory roles as expected, Hadiza Usman is now on the path of proving wrong all the misgivings that trailed her appointment. The reforms she has initiated so far in her determination to make a difference in the agency can be captured under the following areas.

To enhance the ease of doing business in Nigerian ports in line with current international best practices, Hadiza Usman is now pushing for a review of the 10-year old port concession. Having operated port concession since 2006, many stakeholders have called for a review to accommodate aspects which are not working in consonance with intended objectives. Prominent among these is the midstream introduction of a port economic regulator and the numerous issues that stand to be resolved. Concerned stakeholders, including the port concessionaires themselves, are of the opinion that a review of the entire regime after 10 years of operation would remove areas of conflict and allow operators learn from mistakes made along the line. NPA is pushing for this review.

INTERFACE WITH OTHER AGENCIES AND CRITICAL STAKEHOLDERS

To ensure improvement in operational efficiency in the ports, NPA is now effectively interfacing with other agencies. It has introduced a National Single Window Project to domicile all operations (including those of the Nigeria Customs Service and other agencies) into one platform.

Under Usman, NPA now publishes tariffs on its website for easy access by the public. Pricing is become competitive in line with the practice across the West African sub-region and the rest of the continent.

There is now purposeful engagement of maritime professionals by the NPA in most of its activities to make the ports more attractive for business.  At her maiden meeting with members of the Ports Consultative Council (PCC), the managing director acknowledged the fact that the maritime industry “needs the experience which many members of the PCC are bringing forward to NPA in charting a new course for the sector.”

In December 2016, the Delta State Seaports Stakeholders’ Association under Chief Emiko Oghomienor threw her weight behind various reforms the NPA managing director has been championing since coming on the saddle.  The association commended Usman for recognizing the need to review the 10-year old port concession agreement.

STAFF REDEPLOYMENT AND EXPANSION OF FACILITIES

In August 2016, the managing director approved the redeployment of 19 senior management staff including general managers. She also approved a ban on indecent dressing in the agency. These are part of the strategic attitudinal reforms designed to drive high level productivity while improving the public image of the NPA.

While marking her first 100 days in office last December,  Usman announced the readiness of Nigerian ports to absorb the anticipated increase in imported vehicles following government’s prohibition of entry of the commodities through land borders.  “We would up what have been in existence before. We are ready to take the increase in traffic of vehicles and other cargoes,” Usman had said.

A robust debt recovery mechanism is now in place in the NPA. Huge debts running into $585 million (about N178.42 billion) owed the agency over a period of 10 years are now being recovered. Usman recently announced that NPA had developed a framework on debt collection.  “We want to reconcile a proper position of what our indebtedness is.” Debtor-terminal operators are now being compelled to clear all debts they accumulated over the years. For instance, steps have been taken to recover NPA’s N400 million trapped in Aso Savings. Another $19 billion in Heritage Bank is also being recovered.

There are strong indications that henceforth, NPA will no longer tolerate land allocations that are encumbered following the inability of allottees to have access to them. According to the managing director, “the lessees have to take possession; we should not lease a land that is encumbered.”

STRICT COMPLIANCE WITH THE TSA

Under Usman, NPA has come out strong on the decision to implement the stipulations of the Treasury Single Account, TSA. Legal action is being considered against some firms that collected money on her behalf and refuse to remit same through the TSA. Industry operators have been told that no one has the right under any guise to withhold revenue collected on behalf of the government.  According to the recently-introduced Standard Operating Procedures (SOP), timelines within which to make payments into the TSA have been given to firms making collections on behalf of the agency. Through the process of budget transparency commencing with the 2017 budget, NPA’s budget is now available for scrutiny by everyone no matter where.

NPA now engages in proper structuring of public private participation (PPP) for towage services and dry-dock of vessels. This is an initiative the agency is pursuing to generate employment for citizens and huge revenue for government.

SECURITY CONCERNS AND COMPLIANCE WITH THE ISPS CODE

In terms of strict compliance with the International Ship and Port Facility (ISPS) Code, NPA is now leading. The need for total compliance was recently communicated to all terminal operators. Since then, the compliance level has been very high.

NPA’s Command and Control Centre now highlight security matters. This has become useful in providing data about the security of vessels.

NPA under Usman has introduced an arrangement whereby Dangote Group and Flour Mills are now collaborating to rehabilitate the long-neglected Apapa Port access roads as soon as the federal government approves proposals made to include drainage. Meanwhile, rehabilitation of Creek Road, one of the major entry points into Apapa Port, is now built into NPA’s 2017 budget. Usman has secured assurances from the Federal Ministry of Power, Works and Housing that the Apapa trailer park is to be completed and commissioned this year. The World Bank is to install the electronic system in the park for use by drivers. “The holding bays and trailer park will be operated by the private sector,” Usman stated recently.